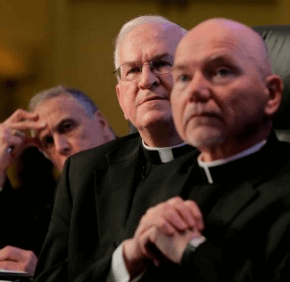 BALTIMORE – Revisions in the U.S. bishops’ quadrennial document on political responsibility draw on the teachings of Pope Benedict XVI and Pope Francis and take into account developments in U.S. foreign and domestic policy over the past four years.

The document, revised by a working group of bishops comprised of the chairmen of several committees whose work is affected by public policy, will be voted on Nov. 17, the second day of public sessions during the U.S. Conference of Catholic Bishops’ fall general assembly.

For passage, the document requires two-thirds of voting bishops to support it. The bishops had set aside 45 minutes to discuss the document before the vote.

The revised document is longer than its predecessors of 2007 and 2011, which garnered much public attention during the two previous presidential election years. The working group has been working on the revision since March 2014.

The document reflects on long-held concerns related to abortion and the needs of poor people. It also references emerging issues related to court decisions on same-sex marriage, public policies that impact religious freedom and a rising concern for the environment as climate change affects more people around the world.

Notably, the document, “Forming Consciences for Faithful Citizenship,” draws on the words of Pope Benedict’s 2009 encyclical “Caritas in Veritate” (“Charity in Truth”) and Pope Francis’ “Evangelii Gaudium” (“The Joy of the Gospel”) and “Laudato Si’, on Care for Our Common Home.”

The bishops have issued a statement offering guidance to Catholic voters every four years for nearly four decades.

In the latest version, the bishop reiterate in a shortened introductory note that the document is meant to offer “our guidance for Catholics in the exercise of their rights and duties as participants in our democracy.”

“We urge our pastors, lay and religious faithful, and all people of good will to use this statement to help form their consciences; to teach those entrusted in their care; to contribute to civil and respectful public dialogue; and to shape political choice in the coming election,” the document said.

The bishops call on Catholics to the document “prayerfully and in its totality.”

“It is a serious mistake – and one that recurs with regrettable frequency – to use only selected parts of the church’s teaching to advance partisan political interests or validate ideological biases,” the introductory note said. “All of us are called to be servants to the whole truth in authentic love, and it is our fervent hope and prayer that this document will provide aid to all those seeking to heed this call.”

The document describes Catholics serving in public life, whether in elective office or in another setting, as having a “heroic commitment.” The document also reminds Catholics that because they have been entrusted with “special responsibility for the common good, they must “commit themselves to the pursuit of the virtues, especially courage, justice, temperance” in promoting human dignity.

A section in the document specifically cites the Cathechism of the Catholic Church and the importance of keeping in mind a preferential option for the poor. It cites housing and access to adequate food and nutrition as crucial concerns to be addressed.

Another passage echoes the repeated calls of Pope Francis that economic systems must work for the benefit of people rather than simply for the accumulation of wealth.

The document adds references to concerns stemming from Catholic social teaching related to in vitro fertilization, the indiscriminate use of drones for violent purposes, human trafficking, the use of torture and the death penalty.

The bishops express concern for the potential that society may becoming indifferent to war because of the rising number of conflicts around the world that impact the lives of millions of people. They also point to the rise in attacks on Christians worldwide, citing recent statements in homilies from Pope Francis.

“Further, we support policies and actions that protect refugees of war and violence, at home and abroad, and all people suffering religious persecution throughout the world, many of whom are our fellow Christians,” the document said.

The document includes a more detailed explanation of church teaching on marriage and that it can exist only as the union of one man and one woman. It expresses concern that “the institution of marriage is undermined by the ideology of ‘gender’ that dismisses sexual difference and the complementarity of the sexes and falsely presents ‘gender’ as nothing more than a social construct or psychological reality, which a person may choose at variance with his or her biological reality.”

Religious freedom is identified as a top concern by the bishops in a new paragraph of the document, which notes that religious freedom “generally enjoys strong protection in our law and culture, but those protections are now in doubt.” It calls on Catholics to ensure that protections of religious practice and those that affect worship, including tax exemptions for religious institutions, remain in place.

The document reiterates the bishops’ call for comprehensive immigration reform, the importance of preserving Catholic education and protecting the earth from exploitation and pollution.