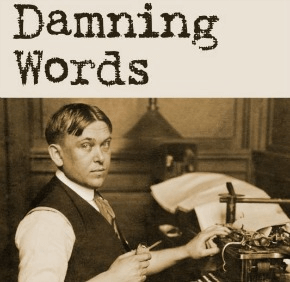 Henry Louis (H.L.) Mencken was a popular American writer and critic during the first half of the 20th century. Born and raised in Baltimore in a prosperous German family, Mencken began his career as a journalist in the Baltimore newspaper but gained national prominence as an author, book reviewer, magazine editor, and as a critic of American life and democracy, amazingly so because he was largely self-educated.

He played a prominent role in the 1925 Scopes Monkey Trial over the legality of teaching evolution in schools. While a baptized and confirmed Christian, Mencken wrote often and critically about Christianity, usually heaping scorn, particularly on Puritans and evangelicals.

Given Mencken’s critical comments on Christianity, it is somewhat of a surprise that this new biography of Mencken, “Damning Words: The Life and Religious Times of H.L. Mencken” by D.G. Hart has been published as part of Wm B. Eerdmans’ Library of Religious Biography, something acknowledged by Mark Noll in his foreword to the book.

The author is faced with writing both an interesting biography of Mencken and one that examines Mencken’s comments on religion so that they help the reader better understand today’s religious issues. Hart makes a gallant effort and generally succeeds in accomplishing both goals.

Hart, a visiting assistant professor of history at Hillsdale College in Michigan, examines Mencken’s life and career from his birth until after his death. He establishes the influence of Mencken’s family upon H.L.’s religious attitudes and pro-German feelings that were to shape his thinking. Hart largely keeps the reader’s interest as he unfolds Mencken’s story, although at times he wanders into areas that seem more trivial than significant.

Hart is strongest when he examines Mencken’s writing on religion. Sometimes it seems he stretches to make religious connections when there seems little there to connect, but these moments are not frequent. In the final chapter Hart looks at Mencken’s contribution to the discussion on religious life today and makes his strongest argument for why Mencken’s thought should be read and given serious consideration by readers interested in religion. It is unfortunate that he did not make more of these types of comments throughout the various chapters when the ideas were initially raised.

In developing this biography Hart relied heavily on three recent biographies of Mencken, which Hart acknowledges throughout. He also quotes Mencken’s writings frequently and at length. Unfortunately, Hart does not footnote his sources, so that the reader would find it difficult to locate any of the quotes to check their accuracy or understand them in context.

As Hart notes, Mencken had the “capacity to expose civil religion’s pretense, idealism and hollowness.” Hart is to be commended for bringing Mencken’s work back to our attention and helping readers to understand that not all critiques of religious attitudes and behaviors are necessarily anti-religious.