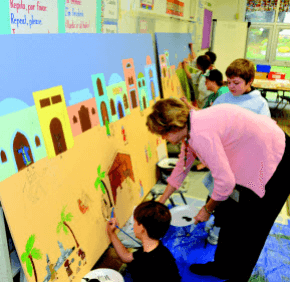 By Jessica Marsala
jmarsala@CatholicReview.org
ELLICOTT CITY – Dancing sheep, Delilah’s hair salon, Noah’s pet shop and Peter’s fish mart are not images typically associated with the Bible.
Those are some of the scenes and characters, however, on a 20-foot-wide mural created by fourth-graders, parents and faculty at Resurrection-St. Paul School in Ellicott City, with an assistance from local painter Kristin Helberg.
“You definitely saw some humor,” said Michele Ruppert, art teacher at the pre-K through eighth-grade institution, of images that were primarily inspired by the New Testament.
Helberg attributed the offbeat visuals to the way children “see things with such fresh eyes.”
This is the third school year she has been Resurrection-St. Paul’s artist-in-residence, part of the Maryland State Arts Council’s Arts in Education grant program. Other residencies available include playwriting, poetry and performing arts.
Helberg described her involvement in the monthlong project, which was completed Nov. 13, as that of a coach or guide, demonstrating skills and giving out tips.
“She’s already got the whole thing mapped out,” Ruppert said, describing Helberg’s choreography of the project. “She figures out how many people (eight groups of seven) will be on each (80-inch-wide panel) at a time and where their positioning’s going to be so no one’s painting over somebody else. It’s all wonderfully laid out and organized.”
Artists ranged from Monsignor John A. Dietzenbach, pastor of Church of the Resurrection, which shares a campus with the school, to fourth-graders such as Gavin Walsh, who painted chickens, a pot, a tree, a camel and a shepherd.
When the project began, Gavin said he knew little about art. After spending time under the wing of both Helberg and Ruppert, he earned the nickname, “Chicken Master.”
“Before I did that (the mural), I couldn’t draw a person,” Gavin said. “All I could do was a smiley face because I didn’t know how to hold the brush right.”
Principal Karen Murphy noted that this school year’s theme, “Preach the Gospel at all times, and when necessary, use words,” commonly ascribed to St. Francis of Assisi, was in mind during the creation of the mural.
Fourth-grade teacher Bonnie Pelc pointed to lessons about the role of shepherds, and God being the “Good Shepherd.”
In previous years, the fourth grade painted murals depicting Maryland and classic children’s literature. Whatever the mural subject, faculty members attempt to integrate the broader fourth-grade curriculum’s lessons of history and geography into the mural project.
Building confidence and teamwork are also part of the project, and Gavin found those community-building aspects to be rewarding.
“My favorite part was probably when I got to see what everybody else did,” he said.
That aspect also resonated with Mary Destino, assistant principal and fourth-grade teacher.
“I think that (the finished product) speaks volumes,” she said. “It’s not just about ‘Oh I did this.’ It’s, ‘Look at what we all did,’ and seeing it all together.”
Also see:
Inside Sports: Former Mercy basketball coach still on the scene
Gifted students get boost at Catonsville School
PrevNext