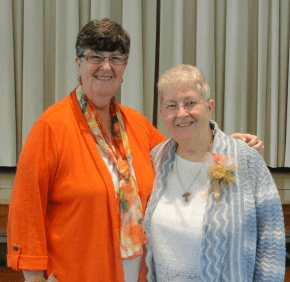 By Catholic Review Staff
Eleven religious women from two orders who served in the Archdiocese of Baltimore were recognized for their lengthy ministries, which spanned generations and have lasted as long as 80 years.
The Sisters of St. Francis of Philadelphia held their jubilee celebration June 12 at Our Lady of Angels Convent in Aston, Pa. It included a renewal of their vows of celibacy, obedience and poverty. Seven jubilarians were acknowledged.
Sister Catherine Georgine Portner, who celebrated her 80-year ruby jubilee, taught at Immaculate Conception School in Towson.
Three diamond jubilarians, each celebrating 75 years of religious profession, ministered in education and healthcare.
Sister Elizabeth Joseph Doyle taught at St. Anthony of Padua School in Gardenville and served as both principal and teacher at Immaculate Conception School. Sister Ann Joseph Hartman served as a nursing supervisor for what is now University of Maryland St. Joseph Medical Center, both at its old location on Caroline Street and the current one in Towson. Sister Kathleen Tobin, formerly Sister Oliveria Joseph, taught at St. Clement Mary Hofbauer School in Rosedale.

From left, Sister Anita Bechert, Sister Agnes Clare Buckley, Sister Joanne Cullins, and Sister Irma Meuse. (CR Files)
Sister Mary Teresa Carmichael, formerly known as Sister Eucharia, is celebrating 70 years of religious profession. She served as a nurse at the old St. Joseph Hospital in Baltimore. She lives in Assisi House in Aston, Pa., where she has organized a group of residents who write to prisoners.
Two golden jubilarians celebrated 50 years.
Sister Marilyn Sands formerly known as Sister James Miriam, taught at St. Anthony of Padua School in Baltimore. She also ministered at St. Peter Claver Parish, where she worked with the deaf and disabled. Since 1996, Sister Marilyn has been an intervention specialist in the Drug Prevention Program at Shalom Incorporated in Philadelphia.
Sister John Celeste Weitzel, who was born in Baltimore, served at Our Lady of Mount Carmel High School in Essex and what is now University of Maryland St. Joseph Medical Center in Towson. Since 2015, she has served as physical therapist for sisters living in the congregation’s motherhouse.
Elsewhere, four Sisters of Providence of Saint Mary-of-the-Woods in Indiana with ties to the archdiocese are celebrating jubilees.
Sister Joanne Cullins and Sister Anita Bechert both taught at the parish school at Ascension in Halethorpe, 1948-52. Both are 70-year jubilarians. Sister Irma Meuse and Sister Agnes Clare Buckley, 60-year jubilarians, both taught at the parish school at St. Clement I in Lansdowne, the former from 1965 to 1967, the latter from 1963 to 1965.
See also:
Pacione in spirit at WYD
Rebuilding: Summer camp adds to healing efforts in West Baltimore
PrevNext