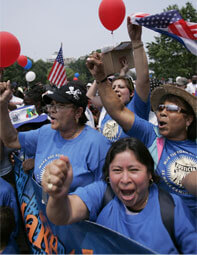 WASHINGTON – Even though the next election was a year or more away, the prospect of winding up on the wrong side of the wishes of voters or vocal interest groups led politicians in Washington to shy away from immigration reform for yet another year.

Meanwhile, in the absence of action at the federal level in 2007, the volume was turned up on calls to crack down on illegal immigration. Immigrants throughout the country started to feel caught in the cross hairs of enforcement raids, new local laws and vitriolic rhetoric.

As it became apparent that the status quo would not be changing because of any action taken by Congress, advocates for comprehensive immigration reform turned their energies to battling attempts at new local restrictions and to helping undocumented immigrants prepare for possible raids and deportation.