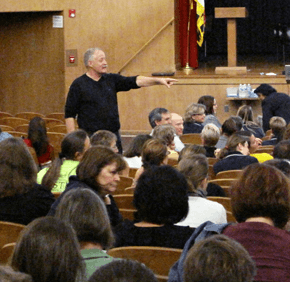 TOWSON – Ian Jukes found it ironic that he was speaking about the importance of technology and engaging students in the modern era in a space that has existed for generations – an auditorium.

Jukes spoke to more than 250 Catholic school educators from 35 schools across the Archdiocese of Baltimore Sept. 21 at Immaculate Conception School in Towson. He talked about Science, Technology, Engineering and Math (STEM) as it relates to today’s students, with an emphasis on technology.

“We live in a world on the move,” Jukes said. “Our kids are disengaged. We’re losing them.”

During an interactive exercise, Jukes asked the audience to draw three rows of dots with three dots in each row, and connect the dots by drawing four straight lines without lifting their pen and without retracing lines.

“We’re focused on the nine dots,” said Jukes, who used the exercise as a metaphor and urged educators to take the handcuffs off their creativity. “What if we’re focused on the possibilities? All it took was a tiny shift beyond my comfort zone.”

Jukes outlined the skills students need to be successful in life after their schooling, which include: problem solving; creativity; analytical thinking; collaboration; the ability to communicate; and ethics, action and accountability.

During the workshop, Olivia Goldsborough, a middle school Spanish teacher at Immaculate Conception, learned that “accepting this generation” is important in preparing her students for their future.

Margy Stringer, a seventh- and eighth-grade science teacher at School of The Cathedral of Mary Our Queen in Homeland, said teachers need to look to the future in their classrooms and embrace technology.

“There’s no going back,” Stringer said. “These children learn differently.”

Peggy Frazier, who teaches music at St. John Regional Catholic School in Frederick, said its seventh- and eighth-graders each received iPads for classroom instruction this year.

“We’re doing many of the things he said,” Frazier said. “It helps us feel confident in the process that we’ve started, knowing that it’s worth it.”

Immaculate Conception School is one of seven STEM schools in the archdiocese. The others are: Holy Angels Catholic School in Baltimore; Our Lady of Grace in Parkton; Resurrection-St. Paul School in Ellicott City; St. Jane Frances School in Pasadena; St. Joan of Arc School in Aberdeen; and St. John Regional Catholic School in Frederick.