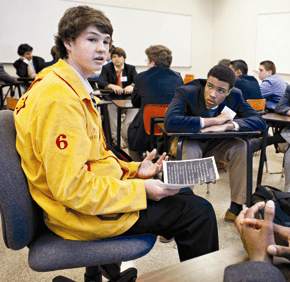 A conversation Mount St. Mary’s University senior Megan Ritchey had with her mother nearly four years ago about alcohol made an impression.

“It really left a lasting impact,” said Ritchey, 22, of Manasquan, N.J. “I for one don’t get involved with drinking on campus. I’m a very involved student and you can definitely turn away from drinking.”

That kind of open dialogue is what educators in the Archdiocese of Baltimore say parents need to do – frequently.

Cindy Parcover, assistant director of Alcohol and Drug Education and Support Services at Loyola University Maryland in Baltimore, suggested parents talk to their children about alcohol as early as elementary school and be conscious of their own behavior.

“I think that parents aren’t recognizing the modeling they are doing very early on and the potential effect that might have in the long term,” Parcover said.

That was echoed by the director of a program that educates Maryland middle and high school students, parents and coaches about drugs and alcohol.

“There isn’t a school out there that can’t do more – that’s not to say they’re not doing something, especially when it comes to the drinking,” Gimbel said.

“It allows juniors and seniors to make a difference in the life of the freshmen,” Hilgartner said. “The way we know it has some effect on the freshmen is because we don’t have any problem recruiting peer educators.”

“You always want to do more, but I don’t know how much the behavior changes,” Stembler said. “We could do 10 more classes, five more peer education classes and more assemblies. It’s a tough issue to wrap your hands around and you try.”

Cami Colarossi, director of communications at Notre Dame Preparatory School in Towson, said in an email that NDP’s guidance department provides programs for students and families, in addition to a Students Against Destructive Decisions Club.

Colarossi said Gimbel gives a presentation to both NDP’s high school students and parents, who are required to attend.

Gimbel laments that some cautionary tales continue to go unheeded.

In May 2010, two weeks before she was to graduate from the University of Virginia, NDP alumna Yeardley Love was found dead in her Charlottesville, Va. apartment

Love’s ex-boyfriend, George Huguely V, 24, of Chevy Chase was found guilty by a Virginia jury Feb. 22 of second-degree murder and grand larceny in Love’s death. According to court testimony, Huguely was reportedly drinking for more than 12 hours before Love died.

Both were lacrosse players at Virginia. According to Parcover, on college campuses nationally, student-athletes are “at the highest risk” for alcohol abuse.

“They are incredibly busy,” Parcover said. “They have practice, they’ve got workouts, they’ve got school, they’re traveling; when they have a free moment they’ve got to get it all in.”

Parcover suggested a different approach; that student-athletes consider the toll destructive behavior takes on their team.

“They need to play well,” Parcover said, “and substance abuse can have an effect on that.”

Gimbel said “There’s always been a misconception that if a child is going to be playing sports that makes them safe from getting involved in other problems, especially drugs and alcohol. Student athletes are just as vulnerable and sometimes even more vulnerable.”

“We’re worried about ‘did they make the tournament?’ ” Gimbel said. “It’s the mentality that it won’t happen to me. If and when it does, your life changes forever.”

Michael Taberski, Mount St. Mary’s dean of students, suggested parents talk through real life examples, including what their children would do if pressured to drink alcohol.

“I trust that, for the most part,” Taberski said, “school districts and high schools are teaching the dangers, but follow up to that with a conversation at the dinner table.”