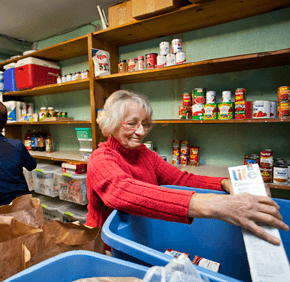 By Elizabeth Lowe
elowe@CatholicReview.org
Twitter: @ReviewLowe
DUNDALK – With the closing of the steel plant at Sparrows Point and Maryland’s unemployment rate hovering around 7 percent, many people in Eastern Baltimore County are having a difficult time making ends meet.
Eastern Baltimore County parishes are offering assistance to a community still feeling the impact of the economic recession four years after the financial crisis.
Our Lady of Hope, Dundalk; Sacred Heart of Mary, Graceland Park; St. Luke, Edgemere; and St. Rita, Dundalk, are among the parishes providing food, prayers and Christmas gifts to those in need.
Father T. Austin Murphy Jr., pastor of Our Lady of Hope and St. Luke, said that even without the steel plant closing, “the economy isn’t great.”
“We have prayers and we have some resources to share,” Father Murphy said. “We have to realize that as a church, we are rooted in the community. There is more than just showing up at Mass. This makes it real to them that this is something we need to do.”
Some in this blue-collar community lost their jobs earlier this year when RG Steel LLC, which owned the Sparrows Point mill, sold it to an industrial plant liquidator.
The company also filed for bankruptcy protection and laid off many of Sparrows Point’s 2,000 workers. Sparrows Point had been one of the county’s biggest employers.
It was announced Dec. 13 that the steel plant, which first produced steel in 1889, will be demolished.
The food pantry at Our Lady of Hope is open the third Tuesday of the month to Dundalk-area residents, said Deacon Herman S. Wilkins, a permanent deacon at Our Lady of Hope. Upwards of 40 people receive assistance monthly.
“We are starting to see more families coming that are in need of food,” said Deacon Wilkins, who added many of those receiving assistance are parishioners and some have been affected by the steel plant’s closure.
More than 70 families received assistance at Thanksgiving and a similar number is expected for Christmas, Deacon Wilkins said. Items include a $15 gift card to Mars, a $10 gift card to Walmart and food for Christmas dinner.
“It’s very rewarding,” Deacon Wilkins said. “You see God working. You give them a sense of hope, they see God in you.”
When Our Lady of Hope’s food pantry opened in 2010, about a dozen people were helped, said Barbara Guraleczka, who helps run the outreach effort. That number has more than doubled.
“We never ask them why they are there,” Guraleczka said. “The gratitude you get from these people, it’s beyond words. It just brings tears to my eyes it is just so rewarding.”
Kathy Marschall, a parishioner of St. Luke and the coordinator of the Edgemere parish’s food pantry which is open Saturdays, said “people are very generous to our food pantry,” but she’s had to reduce the amount of grocery store gift cards and food she gives out.
This shortage comes as more people are seeking assistance.
“A lot of people just don’t have enough,” Marschall said. “People are very appreciative of what you do. It’s a humbling experience to help people who are in need. People are very grateful.”
For more than 30 years, St. Rita has provided a hot meal on Mondays to anyone who walks through the door, said Mary Catherine Haines, a founding member of the St. Rita Supper Table.
When the supper table began in the late 1970s, 50 to 60 meals were served weekly, Haines said. Now, approximately 300 meals are served each week and more than 1,000 meals each month.
The supper table operates “strictly on the grace of God,” Haines said.
Father George J. Gannon, pastor of Sacred Heart of Mary and St. Rita, said “it certainly is a difficult situation because many other things have closed here.”
“Blue-collar jobs have gone away over the last 20 years or so,” he said.
There has been “a tremendous increase” in the number of people coming to Sacred Heart of Mary seeking assistance, Father Gannon said, particularly during the holidays.
Sacred Heart of Mary doesn’t have a food pantry, but “periodically we use some receipts from the poor box to purchase gift cards from Mars or Giant,” said Father Gannon, who added the parish helps people with eviction and utility turnoff notices, working with the landlord or utility company directly.
“The church, in its social teaching, reaches out and touches people in so many different ways,” said Father Gannon, who added parishioners “give of what they would use for their needs. “They just want to share. It’s very moving. Everybody tries to help each other out.”
Copyright (c) Dec. 17, 2012 CatholicReview.org
PrevNext