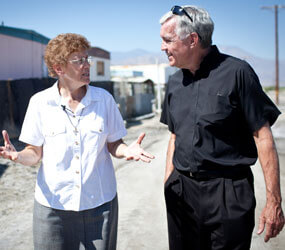 WASHINGTON – Dominican Sister Gabriella Williams, this year’s winner of Catholic Extension’s Lumen Christi Award, sees her work with migrants and other immigrant workers in Southern California as fulfilling part of God’s plan of love for all of humanity.

“We are all God’s people, brothers and sisters. I support whoever I can because we are part of a big family and all that we do must be centered on God. God is love and I try to live this fact by my example,” she said in a Sept. 20 telephone interview with Catholic News Service.

“I am just a little part in a big puzzle and when we all live as God wants us to, then his plan of love can become a reality,” she added.

This marks the 34th year the award has been given to recognize the achievements of individuals who have sought to be like Christ in serving the poorest in their under-resourced dioceses.

Sister Gabi, as she is known, received the award Sept. 21 at a reception following a special Mass at Our Lady of Perpetual Help Church in Indio, Calif.

Sister Gabi works with migrant and immigrant workers in the “lower desert” in the Diocese of San Bernardino, Calif.

As the Lumen Christi winner, she received a grant of $25,000 for her ministry and the diocese also receives $25,000. She was nominated for the award by Bishop Gerald R. Barnes of San Bernardino, who was the main celebrant of the Mass in Indio.

In 2003, the bishop asked Sister Gabi to minister to “the poorest of the poor” in the two-county diocese that covers nearly 27,300 square miles.

She came to her current ministry with the experience of living in harsh conditions – from ministering to the poor deep in the South American jungle near the Argentine border, but as she put it, she “has not experienced such poverty as this,” referring to the area she serves.

In California, drawn to the daily struggles of individuals and families, she ministers to field workers and hourly laborers in the rural Coachella Valley. Most of them are from Central and South American. Most work the land, but some have service jobs at hotels and restaurants. Besides earning low wages, they live in substandard conditions in mobile homes parks.

Sister Gabi told CNS that the workers’ situation is made even more difficult by the downturn in the U.S. economy, forcing some to get extra jobs that take them away from their families for several weeks up to a couple of months a year.

As their advocate for better living conditions, she works with the local agencies to improve fire safety, clear up leaking sewage and install water treatment systems to remove the high level of arsenic that has been found in the water.

She referred to her role simply as “the one that drives the engine.”

She said a major portion of her Lumen Christi grant of $25,000 will go toward her ongoing project to help the community fulfill its dream of building a learning center for children and adults, with the help of a nonprofit organization called Comunidad de San Jose. The center will provide basic education for middle school and high school youths to prepare them for college and will have a trade school to train those who do not attend college.

Another project Sister Gabi has in the pipeline is teaching civics to youngsters through some hands-on experience.

The grant money “will also help finish the water tank, which will be of help to many communities in the area,” she added.

Father Jack Wall, Catholic Extension’s president, praised the generosity of individual Catholic donors throughout the United States for supporting the work of the Chicago-based organization.

He told CNS that this year, Catholic Extension disbursed $20 million to more than 1,000 pastoral projects in 86 mission areas, accounting “for two-thirds of the land mass of the United States.”

He said the annual Lumen Christi Award has two aims: that it be “a source of encouragement to the people who do God’s work, especially reaching out to poorest and most vulnerable in the society, and to encourage all Catholics to be responsive and supportive in bringing the good news to every part of the United States.”

“One of the things that American Catholics should be proud of is that wherever you go in the U.S., you will find the church and the person that represents the Gospel most is the woman religious,” he said.

Sister Gabi is one such person, he said. “Through her activities with the poorest of the poor, she manages to bring Christ to them and bring them to Christ.”