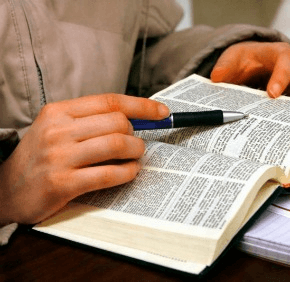 VATICAN CITY – Fifty years ago, the Dogmatic Constitution on Divine Revelation (“Dei Verbum”) urged the faithful to nourish their faith by reading the Bible, putting an end to centuries of seeing direct access to the Scriptures as something reserved to the clergy.

Stating that “easy access to sacred Scripture should be provided for all the Christian faithful,” the document stressed that frequent Bible reading allows the faithful another connection to “the excellent knowledge of Jesus Christ.”

Today, Pope Francis repeatedly asks the faithful to carry a pocket-sized Gospel or Bible and to read several verses a day. The pope even had free copies of a pocket-sized edition of the Gospels given to the faithful gathered in St. Peter’s Square at a number of his Sunday Angelus addresses.

“Take this Gospel; carry it with you, to read it often, every day,” he said in March. “Carry it in your purse, in your pocket, but read it often. A verse, a passage every day. The word of God is a light for our path.”

The Bible is considered the best-selling book of all time with an estimated 5 billion copies sold and with versions in close to 350 different languages. However, a question remains: With so many Bibles available worldwide, why are there still Christians with limited knowledge or access to the word of God?

In short, where have all the Bibles gone?

The Biblical Center of Africa and Madagascar hosted a conference Nov. 10-14 in Rwanda to reflect on “Dei Verbum,” and participants agreed it placed “the Bible at the center of Christian spirituality.”

Access to Scripture is no simple task in Africa, a continent known for its linguistic diversity with an estimated 2,000 languages. Conference participants committed themselves to two goals: finalizing the translation of the Bible in local languages and continuing to work so “that the faithful may have access to the word of God.”

But “Dei Verbum” also is relevant in areas where access to the word of God is not as challenging as in Africa.

For Maronite Father Pierre Najem of Beirut, Lebanon, physical access to Scripture for the faithful does not pose a significant challenge.

“The access to the intelligence of the Holy Scripture is the problem, and we are trying to deal with it through preaching, through a lot of activities in order to help our people, especially young people, to have access to the understanding of the Scripture and to understanding the tradition,” Father Najem told Catholic News Service by telephone Nov.16.

As Middle East regional coordinator of the Catholic Biblical Federation, Father Najem believes that “Dei Verbum” still has an important message, especially in a country as culturally and religiously diverse as Lebanon.

While traditional religious devotions are prominent in the Middle East, the birthplace of the three monotheistic religions, Father Najem says there are still communities not accustomed to reading the Bible often.

“We are a religious people, but we need to help our people be more acquainted with the Scripture,” he said. “That’s why we are working more on the pastoral level to reach the people.”

The Assembly of the Catholic Patriarchs and Bishops in Lebanon has inaugurated a “Biblical Week,” Father Najem said, and the Catholic Biblical Federation organizes a regional conference every two years as well as annual weeklong meetings to help Lebanese parishioners understand Scripture.

The Holy Year of Mercy, which begins Dec. 8, also presents an opportunity to help the faithful understand God’s love through studying Scripture, the priest said. When Pope Francis announced the jubilee, he emphasized the need “to live in the light of the word of the Lord” with mercy at its center.

Cardinal Gerhard Muller, prefect of the Congregation for the Doctrine of the Faith, echoed the pope’s words, saying that the teachings of “Dei Verbum” shed a light on divine revelation as a direct link between God and humanity.

This connection “teaches us above all that divine mercy is not only found in some isolated act of forgiveness of our sins but places us in the most intimate communication with God himself,” Cardinal Muller said Nov. 19 during a conference commemorating the 50th anniversary of “Dei Verbum” at Rome’s Pontifical Gregorian University.

The revelation of God’s love, mercy and plan for humanity through sacred Scripture, the cardinal said, helps to unite Christians, while false interpretations or misunderstandings divide them.

“When we enter into the history of revelation, when we meet with members of the body of Jesus Christ, the word of God creates an internal unity, a communion between God and us. And we clearly know that no man, no philosophy, not even an elaborate and well-thought out ideology can save us,” Cardinal Muller told CNS.

“It is God who saves mankind and not mankind who saves God,” he said.

For the faithful to understand the Bible and faithfully interpret God’s word, Cardinal Muller offered a simple piece of advice: “I recommend reading or having a Bible with scientific commentaries for this introduction (into Scripture), because all these texts come from a very different time, a very different culture than our own. One needs explanations in order to understand it.”

Cancer no match for friendship, faith