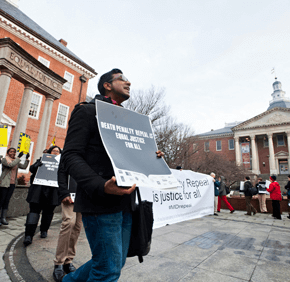 ANNAPOLIS – Vicki Schieber, 68, grins when she talks about her daughter – her intelligence, her beauty, her selflessness.

Her face softens when she talks about her murder.

Shannon Schieber was 24 when she was raped and murdered in her Philadelphia apartment. It was May 7, 1998, three days before Mother’s Day.

It took police four years to find the perpetrator, Tony Graves, who had raped several other women by the time he was apprehended in Colorado. Shannon was the only one he killed.

Graves was sentenced to life without the possibility of parole, not the death penalty, although Pennsylvania is one of 33 states that allow capital punishment.

The sentence satisfied Schieber, a vocal death penalty opponent. Even before Graves was caught, she forgave him, she said. She had seen hate and vengeance rip apart other families, and did not want that for herself.

A parishioner of St. Peter the Apostle in Libertytown, Schieber was among dozens of activists who gathered Jan. 28 outside the Maryland State House to rally against Maryland’s death penalty.

For years, death penalty repeal advocates have been working to abolish capital punishment in the state, which could happen during the 2013 Maryland General Assembly.

Gov. Martin J. O’Malley led efforts to repeal the death penalty in 2009, and has thrown his support behind them again this year. Senate President Thomas V. Mike Miller, a death-penalty supporter, said he will ensure that repeal legislation makes it from committee – where the bill has languished in recent sessions – to a full chamber vote, if the governor can show there are enough votes in the Senate for approval.

Repeal advocates think they have the support of both the House and Senate.

Among them is the Maryland Catholic Conference, which advocates for public policy on behalf of the state’s bishops.

Support for death penalty repeal stems from the church’s pro-life teachings, said Bishop Denis J. Madden, an auxiliary bishop of Baltimore, who met with lawmakers to discuss the issue in January. Bishop Madden and Schieber sat on the 2008 Maryland Commission on Capital Punishment. After a series of hearings, the commission recommended abolition of the death penalty in its final report to the legislature.

Among the commission’s findings were that the death penalty is subject to racial and jurisdictional bias, more costly for the state than cases seeking life without parole, and inflicts misery on victims’ families.

Archbishop William E. Lori wrote a letter to Gov. O’Malley in December urging him to support death penalty repeal this year, and he plans to testify Feb. 14 during hearings on the issue in both the House and Senate.

The MCC is a member organization of Maryland Citizens Against State Executions, or CASE, a Mount Rainier-based coalition. Jane Henderson, its executive director, told rally attendees that 2013 is going to be “a historic year,” but that there is still much work to be done.

“We need to be sending a clear message that the majority of Marylanders are ready to abandon the death penalty and let life without parole be the maximum sentence,” she said through a megaphone.

A recent poll by Annapolis-based Gonzales Research shows 61 percent of Marylanders find life without parole an acceptable alternative to the death penalty; 33 percent find it unacceptable.

Not all Catholics believe the death penalty should be overturned. A national Pew Research Center poll released in 2012 found that 59 percent of Catholics support the death penalty for convicted murderers and 36 percent oppose it. With the exception of black Protestants, majorities of major U.S. religious groups favor the death penalty, according to the poll.

Church teaching grants that public authorities have the right and duty to punish criminals with penalties “proportionate with the gravity of the offense,” according to the Catechism of the Catholic Church – including the death penalty, “if this is the only possible way of effectively defending human lives against the unjust aggressor.”

However, “if non-lethal means are sufficient to defend and protect people’s safety against the aggressor, authority will limit itself to such means,” the Catechism states, “as these are more in keeping with the concrete conditions of the common good and are more in conformity with the dignity of the human person.”

It adds that cases where the death penalty is warranted today “are very rare, if not practically non-existent” given “the possibilities which the state has for effectively preventing crime, by rendering one who has committed an offense incapable of doing harm.”

St. Lawrence, Jessup, parishioner John Meinhardt know this. He has read the Catechism cover to cover, but is concerned that repealing the death penalty will not lead to justice for murder victims in Maryland.

The seriousness of a death penalty sentence demonstrates the value of the victim’s life, said Meinhardt, a longtime letter writer to the Catholic Review. To lessen the punishment is to devalue that life and not apply justice, he contends.

He would like to see the church turn more attention to homicide victims as part of its pro-life stance, he added. According to the Federal Bureau of Investigation, 14,612 people were murdered in the U.S. in 2011, the last full year for which data is available. By comparison, 42 men and women were executed via the death penalty in the same year.

Five years ago, Meinhardt’s work supervisor was murdered by her 28-year-old daughter. He was the first witness to testify at the trial. The daughter was found guilty and sentenced to life imprisonment without parole.

Meinhardt said he accepts life without parole as an alternative to the death penalty, if the sentence can be taken at face value. Living for decades in prison might be a fate worse than death, he reasoned. However, he points to instances of sentence reconsideration, where a judge reviews and sometimes reduces an inmate’s sentence.

In Maryland, an offender for any crime can file a petition within 90 days of sentencing to seek sentence modification, which is rarely granted to offenders with sentences of life without parole, Henderson said – so rare that she likens it to snow in July.

“The odds are so miniscule,” she said. “Life without parole is what it means.”