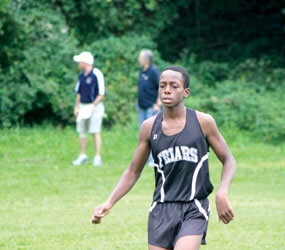 Having coached cross country and both indoor and outdoor track and field at Archbishop Curley for almost 40 years, Gene Hoffman has seen his fair share of athletes come and go.

If it’s one thing that Hoffman appreciates, however, it is the student-athlete who comes in raw and, through hard work and dedication, becomes one of the best on the team.

He started running indoor and outdoor track as a freshman, and added cross country to his pursuits as a sophomore. Since then, Jacques has become the best practitioner of the pole vault in a program known for turning out champions in that event.

“He just works hard, just an incredibly hard worker,” Hoffman said. “As a coach, you love to see the guy where you’re like, ‘Gee whiz, what am I going do with this guy?’

“Then a couple months later he’s looking pretty good. Then a year later he’s a starter on the team. He’s the kind of kid who’s determined to get better and says, ‘Hey, I’m going to make myself good no matter what.’ ”

In addition to the pole vault, Jacques runs the 800 meters and the longer relays for Curley. He said he enjoys running, especially distance running, as it forces him to push himself to his limit to become better than his competition.

“You have to keep running,” said Jacques, the son of Haitian immigrants. “You can’t just stop running and expect to be good. You have to do it every day. Every run you go on you have a goal, and you choose whether or not you make the goal.”

Hoffman predicted that Jacques would be one of his top cross country runners next fall. Jacques enjoys the sport so much that he runs all year. As a member of the Columbia Express Track Club, he qualified for the AAU junior nationals in the 1,500 and 3,000, and for the USA Track and Field juniors in the pole vault.

That dedication carries over to other aspects of his life as well.

“Running is like a discipline because it helps me concentrate in school,” Jacques said. “If you can run, you certainly can focus in school and do well. It gives you that type of discipline that can help you with school if you have the right mindset. If you run every day then you certainly can do schoolwork and study every day.”

That approach has helped Jacques achieve a 4.0 GPA while taking a slew of honors classes, including physics, U.S. government, American literature and trigonometry.

Jacques still finds time to participate in other extracurricular activities. A parishioner of St. John the Evangelist in Columbia, he is also a member of the National Honor Society, the Franciscan Youth Ministry, the Biology Club and the yearbook staff.