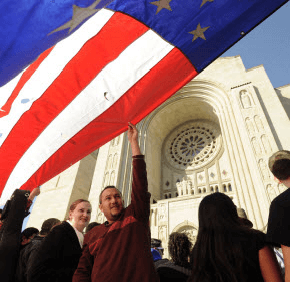 A strong breeze came off of Baltimore’s harbor and over Fort McHenry National Monument Aug. 31, billowing the giant flag visitors had unfurled and held horizontally under a cloudless sky.

As the stars and stripes rolled like ocean waves, Vincent Vaise, a National Park Service ranger and the fort’s chief of interpretation, vividly described the events that inspired Francis Scott Key to pen the poem that would become America’s National Anthem.

Fort McHenry has been at forefront of the bicentennial commemoration of the War of 1812, which began this year. Vaise, 42, has played a key role in planning the various events designed to educate and ignite enthusiasm for Baltimore’s singular claim to Star-Spangled Banner fame.

An attorney, Key was on a diplomatic vessel in the harbor overnight as the British bombarded the fort on Sept. 14, 1814, in the Battle of Baltimore. “By the dawn’s early light,” he could see the American flag still waving over Fort McHenry, assuring him that his countrymen had prevailed.

That morning, a 30-by-42-foot garrison flag was hoisted up the pole – the flag crafted by Baltimorean Mary Young Pickersgill and now on display in the Smithsonian National Museum of American History in Washington, D.C.

The district may have the flag, but Fort McHenry has the history – something Vaise hopes the bicentennial events help Marylanders better appreciate. With his vivid storytelling and contagious enthusiasm, Vaise is on a mission to cure what he calls “historical amnesia” – the pervasive state of collective forgetfulness about significant historical events.

“Most people don’t know anything about the War of 1812,” Vaise said.

Americans love the flag, he said, but they often don’t associate it with a place like Fort McHenry.

“On a very basic level, Baltimore is the Star-Spangled City. I think throughout this country, there are cities that would fight to have the history we have. I don’t think we’ve played it up as much as we could have” prior to the bicentennial, he said.

A parishioner at St. Philip Neri, Linthicum, Vaise was inspired to volunteer at the fort as a teenager by his Mount St. Joseph High School history teacher, Michael Morgan. Like Morgan, Vaise became a “seasonal ranger” for a summertime job.

After earning a history degree at University of Maryland Baltimore County, Vaise joined the staff full time in 1994 and today serves as what he calls “head storyteller” at Fort McHenry and Hampton, a national historic site in Towson. He is usually dressed in his tan and green ranger’s uniform, but dons period costumes for special events.

Fort McHenry’s visitors are up 27 percent this year, which Vaise attributes to the array of bicentennial events, including the weeklong Star-Spangled Sailabration that featured a Blue Angels air show, memorial ceremonies and tall ships in Baltimore’s Inner Harbor.

The fort is preparing for its annual Defenders Day weekend Sept. 8-9, which commemorates the Battle of Baltimore with re-enactors, music performances, artillery and musket firing, and fireworks.

The Basilica of the National Shrine of the Assumption of the Blessed Virgin Mary could have played a role in the War of 1812, Vaise said. Although the structure was not yet built, its foundations had been dug by August 1814, when the British burned the U.S. Capitol (which was also designed by the Basilica’s architect, Benjamin Henry Latrobe).

If the British took Fort McHenry and got into the city, American troops planned to use the basilica’s excavated hilltop grounds as “the last holdout,” Vaise said.

Bicentennial events continue through 2014. Visit starspangled200.com and nps.gov/fomc for details.