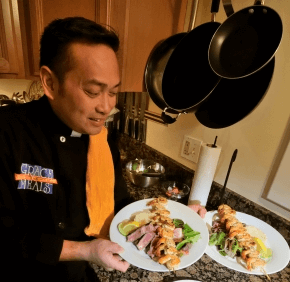 EMMITSBURG – Father Leo Patalinghug wasn’t satisfied with the way his home-cooked dinner turned out for some guests on a recent rainy evening in Frederick County. The steak wasn’t as sizzling as he had planned, the strawberry mousse didn’t have enough time to set properly and the meat had more gristle than he expected.

It’s not as if his guests cared.

Raving about the rich blend of flavors perfected by the award-winning chef, they devoured the food – which included cream of carrot soup, tangy pickled rad­ishes, marinated Mediterranean shrimp and couscous. Going back for seconds was their ultimate compliment.

“If I had to give it a review,” Father Patalinghug said with a laugh, “I wouldn’t say it was great.”

When it comes to food, Father Patalinghug calls it like he sees it. The priest is about to put that straightforward sensibility to even wider use in a monthly Catholic Review column, “Culinary Confessions.” To be published in the first issue of each month, the review will look at how well area restaurants perform in a wide variety of categories.

Father Patalinghug will rate establishments on the quality of their food and how it was presented. He will also look at categories such as menu satisfaction, pricing, beverage selection, ambiance, décor, service, accessibility and family friendliness.

Restaurants won’t be awarded “stars” on how well they performed. Father Patalinghug will instead dish out “Hail Marys” based on any infractions he uncovers.

If he encounters a rude waiter, an exorbitantly priced dessert or a lack of beverage selection, for example, a restaurant might get three or four Hail Marys on a 10-prayer system. If the priest can’t find any area that needs improvement, the restaurant will get one “Glory Be” in thanksgiving.

Father Patalinghug, host of a cooking show on EWTN and author of the popular Grace Before Meals cookbooks, sees the column as a way to draw the Catholic community closer together. He plans to make faith connections in his reviews, emphasizing how food can unite people.

“People are starving for faith,” said Father Patalinghug, who beat the Food Network’s Bobby Flay in a nationally televised cooking challenge in 2009. “They want faith that is accessible to them – faith that is bite-sized and family friendly and not always preachy.”

While he intends to be direct, the priest will remain charitable.

“It’s not my job to make anyone lose customers,” he said, “but it is my job to find out why a place isn’t doing well – and to do it in a fun way that relates to our faith.”

Restaurants won’t be the only food-related venues Father Patalinghug intends to visit. He’ll also sample the culinary creations at school cafeterias, parish fish fries, hospital dining facilities and even soup kitchens. Some of his adventures will be featured in videos and photos on his new Culinary Confessions blog, at CatholicReview.org.

“There are a lot of great restaurants owned by Catholics in the area,” said Father Patalinghug, director of pastoral field education at Mount St. Mary’s Seminary in Emmitsburg. “They all have a message and a story to share. Wouldn’t it be wonderful if we heard about them?”

Tio Pepe’s Restaurante in Baltimore will be the subject of Father Patalinghug’s first review and will be featured in the Feb. 9 issue of The Catholic Review.

Have an idea for a restaurant or other food review? Send suggestions to gmatysek@CatholicReview.org. For more information, visit gracebeforemeals.com.