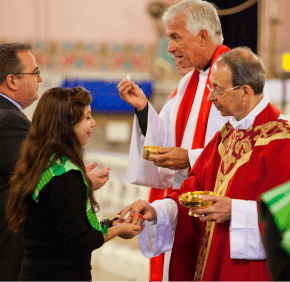 By Catholic Review Staff
Updated Aug. 12, 2014 at 3:20 p.m. : Jesuit Father John W. Swope announced he plans to step down as president of Cristo Rey Jesuit High School next June in an Aug. 12 letter to the Fells Point school community.
“As we step into a new academic year, I am conscious that it will be my ninth year as president of Cristo Rey Jesuit,” Father Swope wrote. “After conversations with the Jesuit provincial and our board chair, I believe that nine years is a good number to round out a presidency.”
As the founding president, Father Swope saw Cristo Rey’s first class of freshmen enter in 2007.
“I am grateful to have served the school for such a great length of time, but it is time to pass the torch,” he wrote. “I feel that there is a cycle for a founding president. I guided the school through the four start-up years leading up to our first graduation in 2011, and then through four years of strengthening the program. To move ahead with the further development of the school, including long range planning, requires fresh leadership to move the school forward strategically.”
Justin White, Cristo Rey’s director of community service and a theology teacher, said Father Swope’s legacy is bringing a Cristo Rey school to Baltimore.
“People are going to remember him for his passion for our school,” said White, who is beginning his sixth year at Cristo Rey.
White said Father Swope is a supportive leader and that from time to time he receives an email or note in his school mailbox from Father Swope thanking him for the work he’s doing.
“His constant support has been really important to me,” White said. “I feel extremely valued in my job. That’s really paramount.”
When Father Swope steps down next June, the school will lose a visionary leader, White said.
“We’re losing someone with the vision since the beginning,” he said.
Wayne R. Gioioso Jr., chairman of Cristo Rey’s Board of Trustees, applauded Father Swope for his devotion to the school’s mission and fundraising efforts.
“His ‘get it done now’ approach was critical during our start-up phase and especially during construction of our wonderful campus several years ago,” Gioioso wrote in a letter to the Cristo Rey community.
Gioioso announced Cristo Rey’s Board of Trustees has assembled a search committee, the makeup of which will be announced in the coming weeks. A national search for a new president is expected to commence in October.
Read also:
Inside Sports: Cristo Rey lacrosse players stick together
Cristo Rey senior grows in faith
Lotto-winning philanthropist Bernadette Gietka dies at 65
PrevNext