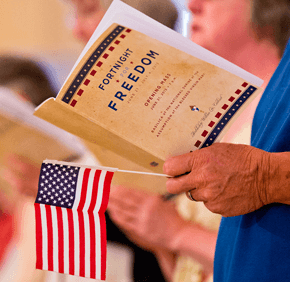 By Maria Wiering
mwiering@CatholicReview.org
The U.S. District Court for the Western District of Oklahoma ruled June 4 that members of the Catholic Benefits Association (CBA), including the Archdiocese of Baltimore and Catholic Review Media (CRMedia), are exempt from the Affordable Care Act’s mandate requiring all employers, including most religious employers, to provide insurance coverage for contraception, sterilization and abortion-causing drugs.
Archbishop William E. Lori of Baltimore said the court decision will allow the CBA to provide “quality, cost-competitive, morally compliant health care benefits for their employees.”
Here’s what Catholics need to know:
1. This all began in 2011 when the HHS defined “preventive services.” Congress passed the Patient Protection and Affordable Care Act in 2010. Also called ‘Obamacare,’ the sweeping health care reform law required insurance pay for “preventive services,” but allowed the U.S. Department of Health and Human Services to interpret that requirement.
The bishops asked that sterilization and contraception not be included, but they were among services the administration adopted in August 2011. The next month, the U.S. Conference of Catholic Bishops formed the Ad Hoc Committee for Religious Liberty, which Archbishop Lori heads, to fight threats to religious freedom.
After push-back from Catholic bishops and other leaders, President Barak Obama offered an “accommodation” in 2012 for faith-based organizations by allowing a third party provider to offer the services, but the bishops found it insufficient. Organizations that do not comply with the renewal of their insurance policies in 2014 are subject to a daily fine.
2. This isn’t (all) about birth control. The Catholic Church’s opposition to contraception dates back to the early church, Catholic leaders (including Archbishop Lori) have argued that funding, facilitating or paying for contraception, sterilization and abortifacients violates Catholic teaching.
They emphasize, however, that their push-back is based on religious freedom.
The plaintiffs’ argue the First Amendment protects religious freedom, and a government does not have a right to compel people to violate a deeply held-religious belief. Several non-Catholic religious organizations, including those who do not share the church’s teaching on artificial birth control, have joined the fight against the mandate.
3. There are 99 cases filed against the administration over the mandate. Fifty non-profit and 49 for-profit entities have sued the federal government over the federal mandate, according to the Washington, D.C.,-based Becket Fund for Religious Liberty, which is handling some of the cases. The Baltimore Province of the Little Sisters of the Poor are among them. Of the non-profit lawsuits, 25 have been granted injunctions (or a current but potentially temporary exemption from compliance) and two were denied injunctions.
With for-profits, 34, including Hobby Lobby’s well-publicized case, have been awarded injunctions; six have been denied injunctions.
Some cases have been dismissed on procedural grounds; others await action.
The most recent to file is the Archdiocese of Philadelphia, which sued three federal agencies June 2 in order to seek relief from the mandate.
4. The Archdiocese of Baltimore joined the fray in March. It helped to form the Oklahoma-based Catholic Benefits Association, and, as a member of the ABA, led a class-action lawsuit against the federal government. Included among the plaintiffs are the CBA, its subsidiary the Catholic Insurance Company, the Archdiocese of Baltimore, the Cathedral Foundation (now known as Catholic Review Media) and Archbishop Lori.
The CBA is a bishop-led cooperative of Catholic non-profit and for-profit employers wishing to provide insurance coverage consistent with Catholic teaching. The CBA runs the Catholic Insurance Company, through which Catholic employers can access value-consistent insurance coverage. According to a CBA statement, it has more than 450 employer members, some of which are not subject to compliance due to the law’s narrow religious exemption. It also includes schools, universities, charitable agencies and health care providers, many of which are not exempt outside of their CBA membership.
5. The CBA isn’t a cure-all. Before the June 4 ruling, the CBA cautioned its members that membership didn’t mean exemption from mandate compliance, but rather participation in its legal efforts to gain exemption. With the ruling, member organizations do not have to comply with the mandate, said Sean Caine, director of communications for the Archdiocese of Baltimore and CBA spokesperson.
While most Catholic institutions are eligible for membership, not all Catholic-owned businesses are. Eligible businesses must be owned and controlled by Catholics and have a written policy stating that the “employer is committed to providing no benefits to the employer’s employees or independent contractors inconsistent with Catholic values.”
The CBA also does not extend membership to non-Catholic faith-based organizations who also seek exemptions from mandate compliance.
Related articles:
Little Sisters of the Poor brief asks court to extend injunction on mandate
Catholics asked to speak ‘with love’ in religious freedom fight
Also see:
Pope: Piety is embracing God, others with real love, not fake piety
PrevNext