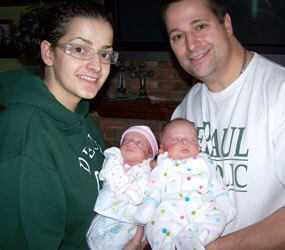 WAYNE, N.J. – Perhaps the birth of the De Mayo identical twins Dec. 29 already might hint at the girls’ personalities, now beginning to form: Natalia, the smaller of the two, announced her arrival into the world by screaming. Melania, the larger of the two, came out of the womb sleeping.

Several weeks later, the twin’s parents, Stephania and Rich De Mayo of Immaculate Heart of Mary Parish in Wayne, beamed proudly as they took turns holding them, sleeping and swaddled, unaffected by the yapping of the couple’s Yorkies, Bentley and Dolce.

For their parents, their birth is a miraculous ending to a “touch-and-go” pregnancy riddled with complications. Their births made medical history as 29-year-old Stephania became the first known heart transplant recipient in the world to give birth to healthy twins.

So many people involved call the twins’ births a miracle, including the physicians and countless people far and wide who prayed throughout Stephania’s pregnancy. Among them were Paterson Bishop Arthur J. Serratelli; one of the twin’s grandmothers, Dr. Mary Mazzarella, who also serves as diocesan Respect Life consultant; and the Sisters of Charity at the order’s motherhouse and a residence for retired religious sisters.

“They are so beautiful and perfect,” said 35-year-old Rich, a restaurant owner in Clifton, as he gazed at his two daughters, born at Newark Beth Israel Medical Center a minute apart and six weeks premature. “It’s a miracle they are here. We weren’t sure that they both would survive.”

Their birth has even greater significance as a “miracle” story, because both Stephania and Rich trusted in God and rejected doctors who advised aborting both babies early on in what was a risky pregnancy.

Mazzarella, a retired pediatrician, acknowledged that Stephania’s carrying twins posed increased medical risks for both mother and babies, but when she heard the doctors had “mentioned abortion, I ran into the chapel,” she told The Beacon, Paterson’s diocesan newspaper.

In the chapel at the Paterson Diocesan Center, where she has her office, “I was in tears, praying to God, ‘How could this be possible. This can’t happen.’ To think of someone destroying a human life is just terrible,” Mazzarella said. “Then, Bishop Serratelli walked by. He came in. We prayed and talked about it. I asked the Sisters at St. Anne Villa (where she volunteers) and others to pray too.”

Bolstered by faith, the De Mayos refused to abort both babies. Later on during a serious complication in the pregnancy, the couple refused one doctor’s recommendation to abort one baby to save the other, Rich said.

“Abortion wasn’t an option. These babies had a fighting chance,” Rich told The Beacon when Natalia came home after several weeks in the neonatal intensive care unit. Melania came home Jan. 14. “We had faith – something greater to believe in from what the doctors were telling us.”

The De Mayos’ faith was tested when doctors discovered that Natalia’s life was in danger from an unequal flow of blood and nutrients. That’s when a doctor matter-of-factly suggested the weaker Natalia be aborted to save the stronger Melania, Stephania said.

“In the medical evaluations, doctors found that the babies were 100 percent healthy. Their hearts and bodies were fine,” Stephania said. “My children are everything to me. I have to be an advocate for them. I couldn’t take one of their lives.”

Another doctor suggested that a risky type of laser surgery could correct the potentially fatal in utero blood-and-nutrient-supply problem. It was a success.

Bishop Serratelli kept the twins in his prayers during Stephania’s pregnancy, among his other intentions for the sick. He also checked in on their progress, Mazzarella said.

“It’s a great to blessing to the family and to all of us,” the bishop said. “Many people prayed for the babies. Credit (for their births) goes to God.”

In August 2008, Stephania received a heart transplant. She had been diagnosed with restrictive cardiomyopathy, a condition that results in a stiffening of the heart muscle and eventually, heart failure.

The heart came from 14-year-old Sean Clegg, killed by a car while riding his bike near his home. His mother, Gail, has since met the babies and she believes her son is watching over them.

“For us, having kids was always the big thing. My husband loves children,” said Stephania. “Now we want to teach our children to be giving people and teach them about the about the good things in life.”