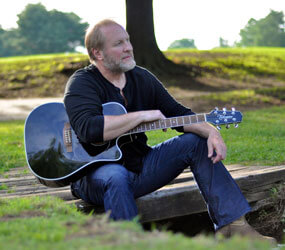 WASHINGTON – Collin Raye, the Catholic country singer who had a string of hits in the 1990s, said he wanted to make his latest album “feel like you were in church for an hour or so.”

“His Love Remains,” the title of Raye’s new release, contains some familiar church melodies, like “Let All Mortal Flesh Keep Silence” and “Here I Am, Lord.” In the liner notes to the album, Raye, 51, said he was inspired to make the album from witnessing his granddaughter Haley’s struggle with a disease that ultimately claimed her life. Haley would be 10 were she still alive, he noted.

“Any anger or frustration I had for the Lord not getting involved the way I wanted him to get involved went away the moment she passed away,” he said. “He gave us this peace that was his from the beginning.”

Making a religious album was “something I’d been dreaming of doing for over 20 years,” Raye added. “So I said, ‘Let’s do it, let’s do it, let’s make the best one possible.’ I’m thinking maybe God has given me a new niche here. If I did nothing but these kinds of records the rest of my life, I’d be a happy camper.”

After a career with No. 1 singles and platinum albums, “I would be thrilled to have a hit record on contemporary Christian radio, because that’s crossing the barriers,” Raye said. “That’s a primarily Protestant fan base. To have a hit like that in that fan base would be a coup for me.”

Raye became a Catholic in the early1980s. After a show when he was chatting with a married couple who were fans of his, he noticed the wife wearing a necklace bearing a crucifix. Before the conversation ended, Raye said he asked the couple if he could go to Mass with them.

Raised “a heavy, heavy Baptist,” by his own reckoning, in Texarkana, Texas, Raye, in a Dec. 7 telephone interview with Catholic News Service, said he felt he always had a good relationship with God. “I have a pretty good Bible knowledge,” he added. “But I always felt there had to be something more to it.”

When Raye stepped inside Our Lady of Sorrows Church in Portland, Ore., with the couple, he said, “it’s a cliché, but there was a presence in the room I’d never felt before. A heaviness, a good heaviness. I’d never been in a room like that.” By comparison, in the Baptist churches of his youth, “I never felt there was any physical presence in the building other than us.”

Raye even remembers his Rite of Christian Initiation of Adults teacher, Sister Sheila Marie. “She knew her Bible pretty good. It’s all there if you know where to look,” he said. “It was the greatest decision I ever made in my life. I thank God all the time, especially after confession. ‘Thank you for making me a Catholic, for making me realize how full a faith it is.’“

Raye spoke to CNS from Cincinnati, where he was performing for a benefit concert for the Terri Schiavo Life & Hope Network. Raye is the national spokesman for the charity. Schiavo was the brain-damaged Florida woman who died in 2005 after her husband, following an extensive legal battle, successfully fought for the right to discontinue her feeding tube. She died 13 days after doctors withdrew her nutrition and hydration.

“As far as entertainers go, a lot of them steer clear from a topic that’s controversial,” he said, referring to Schiavo’s death and the issues surrounding it. “Topics like that cause me to lose some fans. But that kind of thing doesn’t worry me very much. I was always passionate about Terri’s story, even when I was just reading the mainstream media’s version of it.”

Not that Raye has a lot of love for the country scene in Nashville, Tenn. He makes his home in Dallas.

“There’s so much evil in the music business. It’s not pretty. It’s just as political as politics. There’s a lot of distractions, there’s a lot of people who call themselves Christians and then try to rob you,” Raye said.

“Wouldn’t you love to have another hit record? If I could have one without having to go through all what you go through,” he added. “There’s a lot of compromise in that business. … I did it once and I don’t care to do it again.”