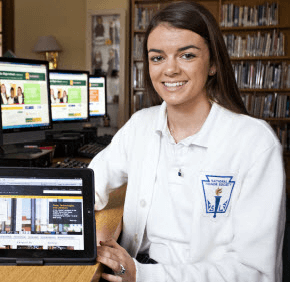 By Paul McMullen
pmcmullen@CatholicReview.org
Trying to diagnose an issue with the hard drive on your desktop?
Ask Megan.
Need an outgoing type to shepherd prospective students around the building?
Ask Megan.
Is the swim team looking for someone who can handle the breast stroke on the medley relay?
Same answer.
“Ask Megan Lynch” has been a common refrain at The Catholic High School of Baltimore, where it will take several young women to replace all of the work and goodwill she produced in her four years there.
UMBC’s Center for Women in Technology (CWIT) will welcome 11 new scholars this year. Lynch, Sydney Menikheim and Samantha Sullivan, who came through Catholic High’s STEM (science, technology, engineering and math) program, are believed to be the first trio from one high school to enter CWIT in the same year.
Among the qualities UMBC looks for in applicants is a history of leadership, an area where Lynch’s proficiency in the IT field and personality created a tangible track record.
Lynch was a sophomore when she began volunteering as a student ambassador for Catholic High, and it’s no coincidence that its Class of 2015 includes at least a half-dozen girls who followed her there from St. Jane Frances School in Pasadena.
“When visitors are interested in the school, she talks to them,” said Amanda Trapani, the director of technology at Catholic High and a member of its Class of 2000. “She interacts so well, and is very mature. I can talk about all we offer, but it’s better when it comes from a student.”
In addition to younger students and peers, faculty and staff also benefit from Lynch’s touch.
According to Trapani, Catholic High is the only all-girls school in the Archdiocese of Baltimore with a student-run help desk, as seasoned STEM students are just as apt to help an administrator or teacher install a feature as they are to assist a freshman with her new iPad.
“We needed tech brochures for a freshman welcome,” Trapani said, “and we asked Megan to do it. At the end of the day, she asked, ‘Do you want me to keep working on it at home?’ She researches a problem, never says, ‘I can’t do it.’ “
Lynch is simply continuing the example others set for her.
Her mom, Amy, went to UMBC. Her dad, Leo, sells firewalls for a tech company. They relied on her to drive her brother, Sean, a rising junior at Archbishop Curley High School, over the Francis Scott Key Bridge during their commute the last two years.
The family lives in Severna Park, where Lynch worked last summer as a lifeguard at Chartwell Country Club. She swam and played volleyball for Catholic High, was president of its Athletic Association, was a member of National Honor Society and Spanish Honor Society, and served on the Student Council.
All of those activities and interests, however, pale in comparison to her passion for computer science.
“A teacher from St. Jane Frances sent me here for the math Olympiad when I was in the sixth grade,” Lynch said. “She introduced me to Catholic High, and it was the only school I applied to. At the time, it was the only (Catholic) high school with STEM. I took all the STEM classes.”
Lynch’s acumen accelerated during her junior year, in the second semester of computer engineering, when students write their own program.
She eyes a career in the burgeoning field of cyber security, but Lynch is old-school in one regard. While her generation grew up on digital wizardry, she appreciates animation circa 1950, as evidenced by her favorite Disney film.
“Cinderella,” she said. “The original.”