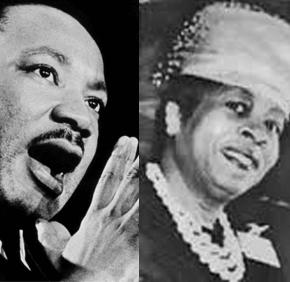 While Hattie Carroll suffered from chronic hypertension and most likely was diabetic, the accepted wisdom is that she died because of the color of her skin. Feb. 9 marks the 50th anniversary of the death of Carroll, a 51-year-old black server and mother of 11 who was assaulted at a party at Baltimore’s old Emerson Hotel essentially because she didn’t fetch a bourbon quickly enough.

William Zantziger, her white assailant, was a 24-year-old tobacco farmer from Charles County. While not as notorious as the murder of Emmitt Till or the Birmingham, Ala., church bombing, her death and Zantziger’s trial was a galling chapter in the march to racial equality.

A three-judge panel in Hagerstown reduced the murder charge against Zantziger, who on Aug. 28, 1963, was found guilty of manslaughter, sentenced to six months in prison and fined $500.

That same day, on the steps of the Lincoln Memorial in Washington, D.C., Rev. Dr. Martin Luther King Jr. was delivering his “I have a dream” speech. The musical entertainment included Bob Dylan.

Then 22, Dylan went home and wrote the “The Lonesome Death of Hattie Carroll.” At 5 minutes, 48 seconds, it did not make the Top 40 or Soul playlists.

This was before the University of Maryland Medical Center built its renowned Shock Trauma Center, and Carroll was taken to Mercy Hospital, 13 days before its new tower opened.

Dr. George Miller, a retired ob-gyn who still serves Mercy in its pastoral care department, began his internship at Mercy in 1952 and served his residency there. He can recall Baltimore hospital wards being segregated by gender and race.

He also recalls the caring of the Religious Sisters of Mercy, who staffed what was then known at Mercy as the “Accident Room” from 7 a.m. to 7 p.m., and likely were not on duty when Carroll was admitted at an early morning hour.

“From her history, she had not seen a doctor (previously),” said Miller, reading from a copy of Carroll’s discharge summary, which detailed the eight hours between the assault and her death. “If she had, she would have been aware of the hypertension. Of course, that was not being treated in 1963, but her diabetes could have been treated.”

That medical opinion figured in the verdict. The defense argued that Zantziger did not intend to cause Carroll’s death when he struck her with a toy cane, that he had no criminal record and that it would have been a routine assault if not for what today we call pre-existing conditions.

Those nuances stick with Judge Charles E. Moylan, of the Maryland Court of Special Appeals. Fifty years ago, he was the Deputy State’s Attorney for Baltimore City who led the prosecution of Zantziger.

“It was the biggest single case I prosecuted in my life,” Moylan said. “It happened in the middle of a turbulent decade. I shut down everything else, and treated the case with maximum seriousness.”

As Moylan explained, six months in a local prison was the equivalent of two years in a state facility, where Zantziger would have been eligible for parole after serving 25 percent of his sentence.

“This was a massive violation of Hattie Carroll’s civil rights,” Moylan said. “We weren’t happy, we wanted more of a vindication than six months.”

The Maryland judicial system was an easy target for a young singer-songwriter, but Moylan says, “No. 1, I’m grateful to Bob Dylan for commemorating the event.”

Moylan will do the same next month at a reception in Hagerstown that will include Bruce Poole, the son of the late Washington County state’s attorney who assisted the prosecution, and Lt. Gov. Anthony Brown.

Black History Month will be over by then, but Hattie Carroll is always worth remembering.

Paul McMullen is the managing editor of the Catholic Review.