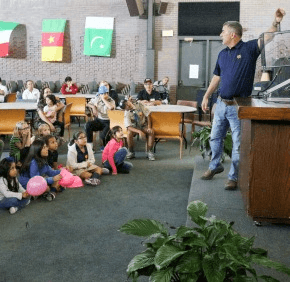 By Kit Cross
Special to the Review
COLUMBIA – St. John the Evangelist Parish teamed with the Maryland Department of Labor to host an inaugural Public Health Safety and Prevention Fair at the Wilde Lake Interfaith Center, the worship site it shares in the center of Howard County.
The outreach was in response to high rate of injury and death among construction workers, particularly Hispanics and Latinos.
The purpose of the fair “is to get people informed of some of the hazards they’re exposed to in the workplace and how to prevent those injuries,” said Thomas Meighen, commissioner of the Maryland Department of Labor.
Jannette O’Neill-Gonzalez, a public health administrator, parishioner of St. John the Evangelist and event coordinator, said a lack of communication and understanding of safety plays a role in some of the injuries, but said the issue goes beyond any language barrier.
“The Latino worker is trying so hard to give their best effort that they overlook the huge threat to their lives,” says O’Neill-Gonzalez. “Ultimately, (the fair) is to teach our Latino families the importance of safe practices. … At the end of the day, we want Dad to come home.”

Electrical workers demonstrate how they use a fiberglass pole to create safer working conditions around high voltage power-lines at the Wilde Lake Interfaith Center in Columbia Oct. 16. (Kit Cross/Special to the Review)

A press release noted that 38 Hispanic or Latino workers died in Maryland from 2012-2014, of which 22 were construction workers.
Many of the families in attendance attend St. John the Evangelist, according to Father Gerard J. Bowen, pastor, has the second-largest Spanish-speaking population among parishes in the Archdiocese of Baltimore. He said the church’s relationship with the Hispanic community means less fear of asking government departments for help.
“By the church sponsoring this health fair,” Father Bowen said, “it says ‘we are working in collaboration with departments in Maryland that have their interests at heart.’ There isn’t a fear of being deported.”
William Dallas, the assistant commissioner of Maryland Occupational Safety and Health (MOSH), said he wants to break through that barrier.
“MOSH is not concerned with your immigration status,” says Dallas, “We want you to go to work, and come home in the same condition. That’s the bottom line.”
The fair emphasized educating both adults and their children, the next generation of workers. Kids were given neon-colored construction hats and could get their photo taken with Poe, one of the Baltimore Ravens’ mascots. The day, however, wasn’t just fun and games.
There were multiple safety demonstrations from energy company BGE, as workers explained how a home gas leak can cause an explosion. Another demonstration was on the safety equipment used to prevent electrocution when working on power lines.

The fair also provided health and dental check-ups. Marisol Sanchez, who brought her daughter to the fair, had her blood sugar tested.
“There are many things that we don’t know,” Sanchez, a cleaning company employee originally from Mexico, said in Spanish, “It is good to inform ourselves.”
Father Leandro Fazolini, the associate pastor to the Hispanic community at St. John the Evangelist, prayed over workers that they would be kept safe, and blessed their tools and vehicles with holy water.
Father Bowen hopes to make the Public Health Safety and Prevention Fair an annual event.