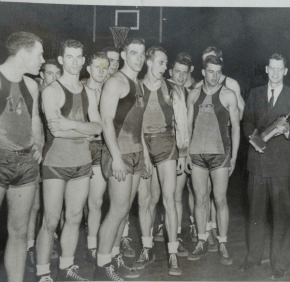 Jimmy Smith wrote “Running with the Greyhounds, A Century of Loyola Maryland Basketball History” about his college alma mater, but it could just as easily have been titled “Running with Baltimore Basketball” – or “Running with Evergreen’s Religious.”

The last Greyhound to average a double-double – double figures in points and rebounds – Smith graduated from what was then Loyola College in 1976 with a bachelor of arts degree, in an era, he notes, when his freshman scholarship covered full tuition, $1,200.

The man known as “Jumpshot” has since made his living in England coaching and promoting the game. His coffee-table sized book, a labor of love, grew out of a request in 2006 to produce a one-page biography for the English Basketball Fellowship.

Lavishly illustrated and researched, and covering more than 360 pages, the book (Dovedale Publishing, Ltd.) includes a foreword by Morgan Wootten, the legendary coach of Hyattsville’s DeMatha High, with diversions into the various affiliations that preceded the formation of the Baltimore Catholic League, one of the nation’s premier high school leagues, and alums who made their mark not on the court but in the media, such as Jim McKay and Vince Bagli.

Jimmy “Jumpshot” Smith poses with Edward “Nap” Doherty, the coach who recruited him to what was then Loyola College in 1972. (Courtesy photo)

Smith pays appropriate homage to the late Jim Lacy, who in 1949 became the first player in NCAA history to score 2,000 career points and is still the school’s all-time leading scorer; Emil “Lefty” Reitz, the Greyhounds coach for all but one season from 1937 to 1961; a February 1952 game at Morgan State of historic significance on the race relations front; and the school’s heated rivalries in the old Mason-Dixon Conference.

One in-state grudge match remains: Mount St. Mary’s. It will be renewed Dec. 5, when Loyola travels to Emmitsburg for a 2 p.m. non-conference game. The two went their separate ways in the early 1980s, when Loyola entered Division I, the point where Smith’s narrative ends.

Smith’s affection is evident for his first Greyhounds’ coach, Edward “Nap” Doherty, who came to Baltimore in 1949 from Brooklyn, N.Y., and never left, leading the Greyhounds to Mason-Dixon titles as a player and coach.

Smith’s recall is most telling during the four seasons he spent at Loyola. That stretch began with a storybook 1972-73 season that included freshmen such as Smith and a 32-year-old ex-con, Ed Butler, who had been discovered playing in the Baltimore Penitentiary, where the Jesuits were providing prison ministry.

The late Jim Lacy, taking the ball to the basket against Seton Hall University in 1947, remains the all-time leading scorer in the history of men’s basketball at what is now Loyola University Maryland. (Courtesy Jimmy Smith)

Smith, conversely, went to the former Northern High School. He was not raised Catholic, but nonetheless chose to dedicate each of the book’s nine chapters to religious men and women, eight Jesuit priests, among them Father James Donohoe, a man of letters and basketball coach; and Religious Sister of Mercy Helen Christensen, who became a math instructor at Loyola College after it absorbed the former Mount St. Agnes College.

“If you ask who was praying for me while I was a student, the answer would probably be Sister Helen,” Smith writes. “She cared about every single student and was a big basketball fan.”