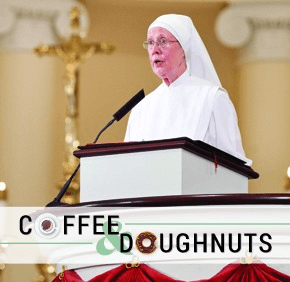 The Catholic Review catches up with Sister Loraine Marie Clare Maguire, Mother Provincial of the Little Sisters of the Poor.

CR: What and where are your Catholic Roots?

SISTER LORAINE: I am a third-generation American, from a strong Irish Catholic background on my father’s side. Two of my great aunts were women religious. Aunt Clara was a Mercy Sister of Plainfield, N.J., and Aunt Marie was a Sister of St. Francis of Philadelphia who taught school in Baltimore for many years. Their example influenced me. I have a Baptist heritage on my mother’s side, so I guess you could say my roots are a bit “ecumenical.”

SISTER LORAINE: After graduating from nursing school in the early 1980s in my native Southern California and working in a hospital for a year as an RN, I became attracted to the religious life. Visiting the Little Sisters of the Poor in San Pedro, Calif., I immediately felt at home. I was struck by the joy, love and dedication they had for the elderly. I experienced the joy of the residents and of everyone who seemed to be involved in their work. There was a peace that permeated the place.

CR: When did you come to Baltimore?

SISTER LORAINE: I was named Provincial Superior of the Baltimore Province of the Little Sisters of the Poor in 2008. Prior to that, I was local superior at our homes in St. Paul, Minn., and St. Louis, Mo. I had been a director of nursing services in our homes in Kentucky, Illinois, California and Missouri. Being a nurse has always been a passion; I consider it a privilege to care for the sick and dying.

CR: How can society better care for the growing population served by your St. Martin’s Home for the Aged in Catonsville?

SISTER LORAINE: Pope Francis has blessed us with this Year of Mercy, an opportunity to reflect on the corporal and spiritual works of mercy. The aged often feel isolated; some don’t have families. Can we give an extra five or 10 minutes to visit someone in our own families or at St. Martin’s Home? Nothing can take the place of the presence of the human person giving of themselves to another. The aged can be easily comforted by the smallest of gestures, even just a smile!

We depend in large part upon charitable gifts to give our residents the excellent care they deserve. If you support our mission by monetary or inkind donations, you help us to feed the hungry, to give drink to the thirsty.

CR: The Little Sisters are in a legal challenge over the HHS contraceptive mandate. Some wonder, why can’t they just sign Form 700, since it isn’t a benefit they utilize?

SISTER LORAINE: Form 700 is not an “opt out” but an “opt in.” Signing it would allow the federal government to take over our health care plan in order to use it to distribute abortifacients and contraceptives to our employees. We cannot provide a health plan like that, any more than we could provide a health plan with access to euthanasia for the elderly.

Signing Form 700 would involve us in formal cooperation with wrongdoing, which is never permissible under Catholic doctrine. In addition, we do not want to cause scandal by giving other Catholics the impression that contraception and abortifacients are OK with us.

SISTER LORAINE: I like them all, but I’d have to say St. Jeanne Jugan, our mother foundress, for her humility and trust in God.