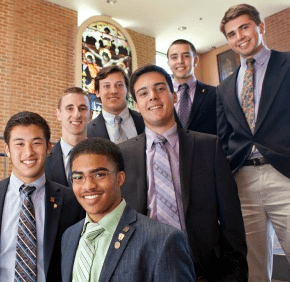 Those are the values that comprise the charism of the Xaverian Brothers who have operated Mount St. Joseph High School in Irvington since 1876.

Now, thanks to a group of students with a few cans of purple spray paint and a passion for Xaverian education, those values are plastered prominently on the walls of St. Joseph Hall.

“If we can’t be saying it all the time, we’re going to paint it,” said Danny Kaiser of the project, which he and his 23 colleagues completed over the summer of 2013. “We’re going to let them physically see these virtues and figure out how they’re going to live them out.”

Kaiser is a member of the Xaverian Brothers Sponsored Schools (XBSS) group at Mount St. Joseph, founded three years ago to promote Xaverian identity and values through service activities and school Masses.

Since the late 1990s, the all-boys’ school has been sending a select group of juniors to the annual XBSS national Student Leadership Retreat. After that retreat in March 2013, seven of the 24 XBSS members in the Class of 2014 came up with the idea of painting those values on the walls.

The project drew inspiration from the departure of many charismatic Mount St. Joseph leaders, such as Xaverian Brother James Kelly, a beloved president, who died in December 2011, when members of the class of 2014 were sophomores.

“It’s more on the students now to demonstrate what it means to be Xaverian,” said Jason Ader, the moderator of XBSS, who teaches science at his alma mater. “We no longer need administrators to show us: It’s the students who are modeling the (Xaverian) life for us.”

XBSS members are accepted into the group in spring of their junior year, after the successful completion of an interview and application.

Besides the paint project, the class of 2014 organized other initiatives, such as a breakfast for freshmen so that they could get to know each other better, and continued the XBSS tradition of “Kicks for Cans,” a soccer tournament that benefits My Brother’s Keeper, a neighborhood soup kitchen.

“I hear from my friends at other schools that they can do certain stuff to a certain extent, but here we’re really able to give back,” Shearer said. “We’re given a lot of the responsibility around the school to perform and to really make change. It builds us into great leaders.”

Jangro and Scranton suggested that no two “great (XBSS) leaders” are exactly alike.

“We pull different kids that demonstrate different (Xaverian) virtues so there’s not a person that clearly embodies all of them,” Jangro said.

“XBSS is a diverse group,” Scranton said. “You have really smart kids, you’ll have kids that are involved in the school, kids who do well athletically. It’s just kind of like a culmination of them all.”

“One of the most important things with this group is that we let them fail,” Ader said. “If they have an idea then it’s important for them to go through the process of planning it and seeing the outcome and then evaluating afterwards.”

Even though Ader said that not all of the events the class of 2014 planned through the student-run group were successful, he was still proud of what they achieved and who they had become.

“This has been by far the most motivated group that I’ve had with running XBSS,” Ader said.