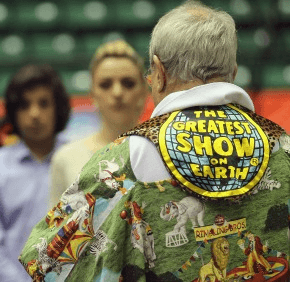 FAIRFAX, Va. – Brazilian trapeze artist Estefani Evans flies through the air above the center ring, mesmerizing the gasping spectators below.

The 25-year-old performer for Ringling Bros. and Barnum & Bailey Circus soared to different heights in that same center ring at the Patriot Center in Fairfax when she received the Catholic sacrament of confirmation in a special Mass held for her, her colleagues and their children.

Because she travels with “The Greatest Show on Earth” throughout the year and performs most weekends, Evans doesn’t have a lot of opportunities to go to church and become a regular parishioner is not a practical option for her.

Yet, her Catholic faith is as important to her as the act she has fashioned for the circus.

U.S. Catholic officials recognized this quandary circus people struggle with and have made efforts to supply them with spiritual and sacramental nourishment.

The U.S. Conference of Catholic Bishops deploy pastoral workers through its Circus and Traveling Shows Ministry to help meet the religious needs of Catholics and people of other faiths who travel with the 50-plus circuses and 300-plus carnivals in the United States.

Women religious traveled with Evans’ Ringling Bros. troupe for several months to help some of the performers and their children prepare for the sacraments of baptism, first Communion and confirmation.

They received those sacraments during a special April 14 Mass held in the center ring at the Patriot Center.

During that Mass, National Circus Chaplain Father Jerry Hogan, swathed in handmade vestments decorated with the Ringling Bros. logo given to him by the circus workers, talked about the sacredness of celebrating the liturgy in the center ring.

“The center ring for the circus people is really their sacred space, where God gave them the talents to become circus performers,” said Father Hogan, who is a priest for the Archdiocese of Boston. “In here we gather together and we thank God for all of their gifts, but we do it in the context of receiving God’s special sacraments.”

Evans told Catholic News Service that receiving her confirmation in the center ring merged two dominant passions in her life, her faith and her career.

“There was no better place to do it,” said the trapeze artist, who is in the fifth generation of her family of circus performers. “My religion is very special to me, the circus is my life, so both together, it’s just perfect.”

Garcia expressed his gratitude for the circus ministry meeting the pastoral needs of his family and circus colleagues.

“Obviously it’s hard for us to go to Mass because we don’t have a chance to get out of here on Saturday or Sunday, or any day of the week, because we travel every single week,” he told CNS. “We are blessed by the fact that we have (a religious sister) who travels with us for a few months out of the year and she is able to arrange, you know, different priests in every single region to come in and give us Mass for 45 minutes to an hour.”

Father Jerry Hogan, national circus chaplain, dries a child after baptizing him during an April 14 Mass in the center ring of Ringling Bros. and Barnum & Bailey Circus at at George Mason University’s Patriot Center
in Fairfax, Va. (CNS photo/Bob Roller)

The special Mass served the dual purpose of providing pastoral needs and bringing the whole “circus family” together for fellowship, Garcia said

“We get a chance to, again, have a nice celebration and be united as one,” he said.