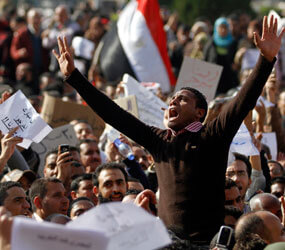 VATICAN CITY – Church leaders were watching the unfolding political drama in Egypt with a mixture of hope for reform and concern over potential violence, said the head of the Franciscan Custody of the Holy Land.

Father Pierbattista Pizzaballa told Vatican Radio Jan. 30 that the widespread unrest that has weakened the 30-year rule of President Hosni Mubarak came as a surprise to Catholics in the region.

“We all sense that these are epochal changes. None of us would have imagined these kinds of developments a few months ago,” he said.

“This means that there are currents, especially in the Arab world, that now have found visible expression. This is certainly a positive sign, but it’s also worrying because we don’t know how all this will end – we hope with the least possible amount of violence and bloodshed,” he said.

Father Pizzaballa said he hoped that “respect for religious minorities will be preserved” in Egypt. His concern appeared to reflect the fact that Mubarak’s opponents include both radical and moderate Muslim groups, and it was unclear who might assume power if the president resigns.

Father Pizzaballa spoke on a church-sponsored day of prayer for peace in the Holy Land. At the Vatican, Pope Benedict XVI marked the day with a prayer to “lead minds and hearts toward concrete projects of peace.” He did not specifically mention the unrest in Egypt.

The pope, joined by two Italian youths, then released two doves from his apartment window as a sign of peace.

In his comments to Vatican Radio, Father Pizzaballa said the search for peace and freedom involves “not allowing oneself to be dominated by passions.”

“We all see how in the Middle East, in the Holy Land and in Jerusalem, passions can blind people. Instead, to have real freedom, we need a certain distance from things in order to see them more clearly,” he said.

He said real freedom in the Middle East needs to include religious freedom, access to places of worship and holy places, and freedom of religious expression.

Francesco Zannini, who teaches at the Pontifical Institute for Arabic and Islamic Studies in Rome, said the situation in Egypt reflected the weakening political power of Arab leaders who have ruled as “monarchs” but who are threatened by changes brought by globalization.

In Egypt, it was unclear whether the momentum of the unrest was great enough to bring lasting reforms, Zannini told the Rome-based agency AsiaNews. One big question, he said, was whether Mohamed ElBaradei, an opposition leader and Nobel Peace Prize winner, had the capacity to govern Egypt.

Zannini said that although Islamic extremists had begun to join the protests in Egypt, he doubted whether they would ever present a governing alternative there. He said he thought radical Islam was losing influence among the populations of the Middle East, and had shown itself too inflexible to have success on a political level, where consensus-building is needed.