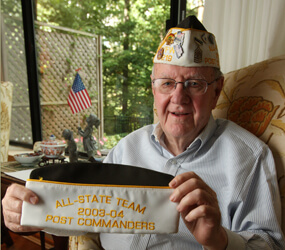 As a U.S. Army veteran who fought in World War II, it pains John Hanlon to watch television news reports about the wars in Iraq and Afghanistan.

“In World War II, we knew who our enemy was,” said Hanlon, an 89-year-old parishioner of Our Lady of the Angels and a resident of the Charlestown Retirement Community in Catonsville.

“In today’s war, we don’t know who the enemy is,” he lamented. “Someone can greet you and wave at you, and then turn around and shoot you. It’s terrible.”

Hanlon identifies very deeply with the men and women who are experiencing the horrors of war. He fought the Nazis in Europe as a first sergeant in the 1st Infantry Division, 26th Infantry Regiment. The Washington, D.C. native also met former prisoners of the Nazi Dachau concentration camp in Germany after the war.

“It was awful,” he said. “We hugged them and they had no strength. They were all skin and bones.”

U.S. veterans of all wars make tremendous sacrifices for their country, Hanlon said.

“Many of us carry scars that surgery will never remove,” he said.

Today, Hanlon is determined to do all he can to raise awareness about the dedicated service of veterans. Through his work with the Veterans of Foreign Wars, he regularly visits local schools to answer questions and talk about his own experiences. As Post Commander of the VFW Post 219 in Catonsville, he helps coordinate the Voice of Democracy essay contest that provides scholarships for high school students.

Hanlon also raises money for disabled veterans and the widows and orphans of deceased veterans. He works with his post to promote a safety awareness campaign in elementary schools and to honor teachers involved in VFW programs. His group also supports Catholic Charities’ Our Daily Bread Employment Center in Baltimore and the Southwest Emergency Service.

In recognition of his leadership in the VFW, Hanlon recently achieved “All-American” status as a post commander for the Veterans of Foreign Wars Post 219 in Catonsville. VFW Commander-in Chief Glen Gardner noted that the recognition is one of the highest honors awarded by the VFW.

Hanlon called it a “privilege” to be involved with an organization that emphasizes community service and honors those who served the nation. Volunteering is in his nature, he said. Before moving to Charlestown nine years ago, Hanlon was an active parishioner of St. Mary in Annapolis. He served as vice president of the parish’s St. Vincent de Paul Society and chairman of its holiday food sharing program for 18 years. At Our Lady of the Angels, he continues to serve as an extraordinary minister of holy Communion, an altar server and sacristan.

Hanlon said he enjoys talking with children and teens about patriotism.

“It’s important to give them a better appreciation about living in a free, democratic country where they have the freedom to vote and express their feelings,” Hanlon said. “I tell you, it gives you a big lift to see young kids learning about freedom.”