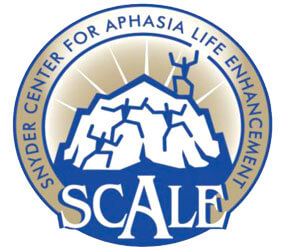 Boarding the elevator recently to take them to a dining room for their evening meal in the Charlestown Retirement Community, Ed and Dottie Arnold were greeted by another couple on the same journey.

“Well, the problem was that it was evening not morning,” explained his wife, “and that couple looked at Ed like he was demented or something.”

There is nothing wrong with her husband’s intellect, but like a million other Americans, he suffers from aphasia, an acquired communication disorder that impairs a person’s ability to speak and understand others and makes reading and writing very difficult. But it does not affect intelligence.

In Ed’s case, as in most others, the affliction was the consequence of damage to the hemisphere of his brain responsible for communication, and caused by a stroke, which the 80-year-old former engineer and business executive suffered 28 years ago.

Stroke is the leading cause of aphasia. Some people may recover completely from the disorder, while others, like Ed, may have permanent speech and language difficulties of varying degree.

To Dottie, the elevator incident was typical of the response to aphasia survivors from people who know little if anything about the disorder. When he drives, which he is able to do, Ed carries on his key chain a brightly colored medallion with the inscription: “Aphasia. Loss of communication but not of intellect.”

“We really have to get the word out,” his wife said, “and that’s what SCALE is trying to do.”

SCALE, an acronym for the Snyder Center for Aphasia Life Enhancement located on York Road in Towson, was founded in 2008 as the metropolitan area’s first dedicated aphasia support and community center and provides a variety of services for stroke survivors with aphasia.

“Together with our strong Catholic faith, SCALE has made such a wonderful difference in Ed’s life, and mine too,” Dottie said.

Ed visits SCALE regularly for speech therapy and to enjoy the companionship of others like him in an environment in which people with aphasia are understood and where they feel comfortable and supported.

“I don’t know what we would have done without SCALE,” his wife said. “It has made both our lives so much more bearable and I know it has for many other aphasia survivors.”

Former parishioners of St. Mark, Catonsville, and now of Charlestown’s Our Lady of the Angels, the Arnolds have seen some recent, encouraging signs of growing aphasia awareness when they go out, for example, for lunch or dinner at a couple of their favorite restaurants in Catonsville.

“They have ‘We’re Aphasia Friendly” signs in their window and the waiters are very understanding and helpful when Ed is struggling to order his food from the menu,” Dottie said.

“That’s a good thing, but much more needs to be done,” she said, noting that while aphasia is, for example, more common than Parkinson’s disease, cerebral palsy or muscular dystrophy, “most people have never heard of it.”

“It’s been our experience that once people learn about aphasia they really respond well,” she said, “and that’s what we’ve seen here at Charlestown when other residents get to understand what aphasia is and how to listen and communicate with Ed.”

Dottie hopes that people will access SCALE’s website at scalebaltimore.org to learn more about aphasia and how they can help and support the non-profit organization’s efforts to increase public awareness and understanding.

“The more people know (about aphasia) the more they can make such a positive difference in the lives of aphasia survivors,” she said.