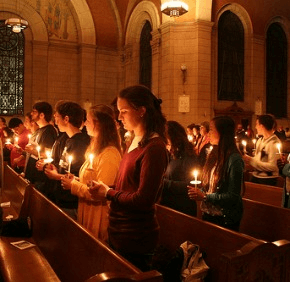 By Maria Wiering
mwiering@CatholicReview.org
Expect “gobs of candles” – as well as young adults – at Ss. Philip and James Oct. 31, said Dominican Father John Paul Walker. As trick-or-treaters dart around the neighborhood, the Charles Village parish plans to host an All Hallows’ Eve liturgy to mark the vigil before All Saints’ Day.
This is the third year the parish, staffed by Dominican friars, has held the Candlelight Vigil of All Saints. It’s modeled after a 15-year-old event held annually at the Dominican House of Studies, the order’s seminary in Washington, D.C.
Father Walker, chaplain to Catholic Johns Hopkins University students, said Halloween should be a night for the church.
“Almost anyone in society, if you asked them what Halloween is about, you would never even slightly hear the word ‘Catholic’ or ‘saint’ or anything like that. It’s just become a completely secularized celebration of ghosts and goblins and scary things. I think that’s a shame,” he said. “I feel very strongly that this night belongs to us. It’s meant to be a night that honors the saints.”
He added: “It (the vigil) is our way of taking back Halloween for its more original, Catholic origin – an evening in which we wait in vigil, we gather in prayer waiting for Nov. 1, which is truly the church’s incredible celebration of all the saints in our life.”
The Oct. 31 liturgy is based on the vigils that were once commonly held before major feasts, such as the Easter Vigil, said Father Walker. Ss. Philip and James’ Friday night vigil will include readings from the writings of four saints separated by short antiphons, a homily, night prayer from the Liturgy of the Hours, and a candlelight procession with the litany of the saints, with an incensing of the relics in the church’s altar. It does not include Mass.
The readings will be taken from writings of St. Ignatius of Antioch, an early church father; Blessed Margaret of Castello, a medieval lay Dominican who has become a patroness of people with disabilities; St. John Paul II, the Polish pontiff who was canonized in April; and Blessed Miriam Teresa Demjanovich, an American Sister of Charity who was beatified Oct. 4 in Newark, N.J.
Father Walker hopes the readings convey “the incredible diversity of what holiness looks like,” he said, showing “holiness is possible for all of us.”
The vigil has been organized by members of the Johns Hopkins Catholic Community and Baltimore Frassati fellowship, a Catholic young adult group also under the direction of the Dominicans at Ss. Philip and James. The event is geared toward young adults, but all are welcome, Father Walker emphasized. About 100 people attended last year.
The procession with the litany of the saints will especially honor those represented by statues and icons in the church, including St. Peregrine, patron of cancer patients.
The prayer service, which begins at 7:30 p.m. and is expected to last an hour, will be followed by a reception in the parish hall.
Also see:
Life of newly beatified New Jersey Sister called ‘recipe for holiness’
Shrine of the Little Flower: A look back at life in the 1950s
PrevNext