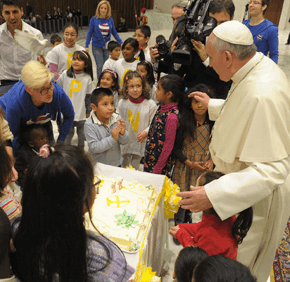 By Catholic Review Staff and Catholic News Service
On Dec.14 children and parents he met in the Vatican’s Paul VI audience hall gave Pope Francis a surprise birthday party marked with singing and a real cake with candles. The children and families use the Vatican’s St. Martha Dispensary, a maternal and pediatric clinic.
In the hall, a group of children piled large blocks on top of each other to reveal the pope’s picture and the Italian word “Auguri,” meaning “Happy Birthday.”
Another group of kids wearing white T-shirts with a yellow letter printed on each one, assembled themselves to spell out “Happy Birthday, Pope Francis” in Italian.
When presented with the cake, the pope blew out the candles. He joked, “I’ll tell you later if it’s good or not.” He thanked the children for their joy and gifts, which included a sweater.
Rather than giving a talk, the pope spent the audience greeting, holding and blessing the children there. One small boy the pope was holding plucked the pope’s skullcap off his head. The pope laughed and managed to put the cap back.
This is just one example of how Pope Francis, formerly known as Cardinal Jorge Bergoglio of Argentina, is relating to Christians of all ages.  He is celebrating his 77th birthday Dec.17.
Since his election March 13, Pope Francis has been making headlines around the world for his humbleness and compassion for those marginalized by society.
As Time magazine observed in naming him Person of the Year, Pope Francis has captured the imagination of “young and old, faithful and cynical,” by placing himself at the center of important conversations of the times: “about wealth and poverty, fairness and justice, transparency, modernity, globalization, the role of women, the nature of marriage, the temptations of power.”
People of all faiths have been inspired by the pope’s dedication to live out his faith on a daily basis. From washing the feet of inmates at a juvenile prison in Rome to reportedly sneaking out at night to help the poor, Pope Francis has not been afraid to get his hands dirty and show the world what it means to serve.
Below is a look at the quotes and photos that have helped Pope Francis become known as “The People’s Pope.”
On the poor:
“I prefer a Church which is bruised, hurting and dirty because it has been out on the streets, rather than a Church which is unhealthy from being confined and from clinging to its own security.”
By sharing in Christian charity with those “who face numerous obstacles,” the pope said, “we promote an authentic cooperation with the poor so that, through the fruits of their and our work, they can live a dignified life.”
Enjoy a slideshow of some of the memorable moments of Pope Francis’ pontificate.
On women in the church:
“I readily acknowledge that many women share pastoral responsibilities with priests, helping to guide people, families and groups and offering new contributions to theological reflection,” the pope writes in “Evangelii Gaudium.”
“Women in the church must be valued, not clericalized. Whoever thinks of women as cardinals suffers a bit from clericalism,” he said in an interview with Andrea Tornielli of the Italian daily La Stampa.
On the sick:
Parishes and Catholic organizations must be “pastorally inclusive” of the fragile and sick, who are a “spiritual resource” and not simply the object of Christian charity, Pope Francis said Nov. 9.
“To live charitably means not looking out for our own interests, but carrying the burdens of the weakest and poorest among us.”
On children:
“Patience with children is beautiful, just as it’s beautiful to talk with them and teach,” Pope Francis said Dec. 1 during a visit to Church of San Cirillo Alessandrino in Rome.
“Any time a child is abandoned or an older person marginalized, it is not only an act of injustice, but marks the failure of that society. Taking care of little ones and of the elderly is a mark of civility,” Pope Francis said Oct. 25 during a meeting with members of the Pontifical Council for the Family.
On evangelization:
“Interreligious dialogue and evangelization are not mutually exclusive but they actually strengthen each other. We don’t impose anything, we don’t use some subtle strategy to attract the faithful, but rather we give witness to what we believe in and who we are with joy and simplicity,” Pope Francis said Nov. 28 at a meeting.
In comments written in “Evangelii Gaudium,” Pope Francis says an “evangelizer must never look like someone who has just come back from a funeral!”
On reform in the church:
“A few months ago, an elderly cardinal said to me: ‘You have already started curia reform with your daily masses in St. Martha’s House.’ This made me think: reform always begins with spiritual and pastoral initiatives before structural changes,” Pope Francis said in an interview published Dec. 16.
The Curia “has one defect. It is Vatican-centric. It sees and looks after the interests of the Vatican, which are still, for the most part, temporal interests. This Vatican-centric view neglects the world around us. I do not share this view and I’ll do everything I can to change it,” Pope Francis remarked in an interview with Eugenio Scalfari.
On Marriage:
“There are problems in marriage: different points of view, jealousies, arguments, but tell young couples to never let the day end without making peace. The sacrament of matrimony is renewed in this act of peace,” the pope said Oct. 25 during a meeting with members of the Pontifical Council for the Family.
“Praying the Our Father together around the table is not something extraordinary; it’s easy. Praying the rosary together, as a family, is very beautiful and a source of great strength.”
See also:
Pope Francis’ top ten reasons to go to confession
PrevNext