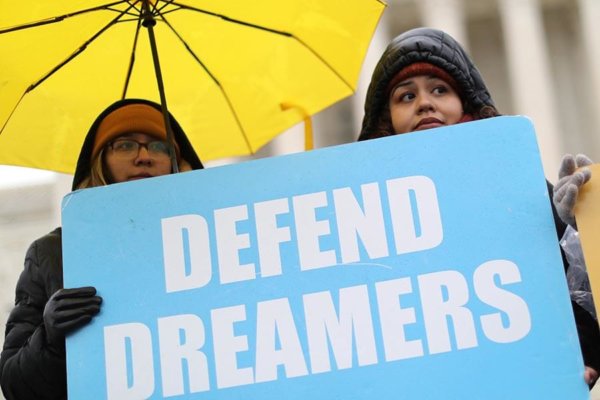 WASHINGTON (CNS) — As the U.S. Supreme Court justices prepared to hear oral arguments in a case on the Deferred Action for Childhood Arrivals program the morning of Nov. 12, Catholics met at Columbus Circle in Washington to pray the rosary for the intention of all DACA recipients, their families and all immigrants in the United States.

“We’re not just praying for the justices to be on the right side today, we’re praying for elected officials to wake up and to finally give a solution for the 700,000 DACA recipients living in this country,” said Jose Arnulfo Cabrera, a DACA recipient and the director of education and advocacy for migration for the Ignatian Solidarity Network.

The prayer gathering — which was followed by a walk to the steps of the Supreme Court, joining others participating in the national Home is Here campaign rally — was co-sponsored by the U.S. Conference of Catholic Bishops’ Justice for Immigrants, the Ignatian Solidarity Network, the Catholic social justice lobby Network and others.

In a 2012 executive order, President Barack Obama instituted DACA, a policy allowing immigrants brought as children by their parents into the United States without documents to apply for deferred action from deportation while also applying for a work permit or attending school. In 2017, President Donald Trump issued an executive order to end the DACA program. The resulting legal challenges led to the Supreme Court hearing the case on the program’s future.

Giovana Oaxaca, a DACA recipient and the government relations associate for Network, led more than 50 people in the rosary.

“We’re praying the rosary today for our elected leaders and the justices of the Supreme Court, knowing that God can open minds and change hearts,” Oaxaca said. “We commend those in the DACA community and our immigrant brothers and sisters into the loving hands of blessed mother, Virgin de Guadalupe.”

By gathering first in prayer, Oaxaca said the group was making a powerful statement.

“We are able to bridge a lot of divides by praying together,” she said. “It is a solemn thing … but we want everyone to know we have faith and hope.”

Originally from Ciudad Juarez in Mexico, Oaxaca came to the United States at age 3. She received DACA status before applying to college, where she was able to graduate with a degree in political science and economics. Without DACA, she said, it would have been a lot harder to go to college and to afford college.

The wait to hear the Supreme Court’s decision, which is expected to be issued in June, will be “painstaking,” Oaxaca said.

“It will keep us all on our toes,” she added, saying that work will continue to place pressure on legislators to “keep the drumbeat going.”

Alyssa Aldape, associate pastor for young adult and youth ministries at the First Baptist Church of the City of Washington, joined the walk from Columbus Circle to the Supreme Court building. She said she saw her participation in the day’s events, “part of her faith.”

“It’s a way for me to stand in solidarity with those who are vulnerable,” Aldape told the Catholic Standard, newspaper of the Archdiocese of Washington.

For Valeria Bejar, a DACA recipient who led the group in one of the decades of the rosary, whenever she hears the number 700,000 representing DACA recipients, she said she tries to keep in mind all the other families who might remain in this country without documents.

“I try to remember it’s more like double that,” she said.

As to what the upcoming months might look like as many wait for the Supreme Court’s decision, Bejar said she has no idea what to expect.

“There are so many different things that could happen, but we’ll continue the fight,” she said.

Now living in Arizona, Bejar traveled to the Washington area to join other immigrants on a walk from New York City to Washington that ended before the rally. The 230-mile walk began Oct. 26 and Bejar said she joined the group at mile 223.

“It was a beautiful expression to see the diversity in DACA recipients,” Bejar said.