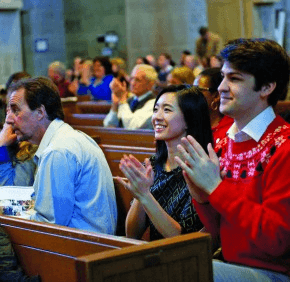 Twitter @ReviewErik
Among the most inspiring perspectives on the Catholic Church are those voiced by the men and women who underwent the Rite of Election Feb. 14, affirming their intentions to become full participants in the 2,000-year-old institution.

Lesley Beavers, 37, a catechumen from St. Casimir in Canton, said her Catholic friends – “ethical people and compassionate people” – were a major influence on her decision.

“I have a real admiration for the kind of people they are,” she said, “their values, and how they do good for others.”

Beavers was one of 529 catechumens (those preparing for the sacraments of baptism, confirmation and Eucharist) and candidates (already baptized, preparing for the sacraments of confirmation and Eucharist) who filled the Cathedral of Mary Our Queen in Homeland for the Rite of Election, celebrated in English and Spanish by Baltimore Archbishop William E. Lori with Monsignor Richard W. Woy.

Beavers grew up occasionally attending Methodist worship with her grandmother and, a public school student, she prayed frequently on her own, always desiring to be closer to God.

“I wanted a good Christian life, but I didn’t think I had all the pieces to put it together,” she said.

That changed during her undergraduate years at St. Bonaventure University, a Franciscan-founded institution in New York.

“Finally, it was like, ‘Oh, wow, this is all interconnected,’” Beavers remembered.

Her public school education, she said, had taught her the significant periods, events and people of history, but her religious education provided a context and continuity for everything.

“God is everywhere,” she said. “God is in art; God is in writing; God is in nature.”

It would be several years before she took concrete steps toward becoming Catholic. One of her St. Bonaventure friends, who coincidentally settled in Baltimore and is a parishioner at St. Casimir, “gently nudged” Beavers to attend Mass, she said, sometimes dangling the carrot of a post-worship brunch outing.

“It feels right,” Beavers said of her new trajectory. “I know it’s right.”

Paraphrasing Pope Benedict XVI, pope emeritus, in his homily, Archbishop Lori affirmed the newness of purpose cited by Beavers and others: “We are Christians because we’ve had an encounter with an event, a person, Jesus, who gives our lives a new horizon and a definitive direction.”

Like Beavers, Lindsay Baron, a 30-year-old candidate from St. Paul in Ellicott City, experienced that encounter through another person.

“My grandmother was a huge influence on me,” said Baron, who was baptized Catholic and began exploring the faith in earnest – albeit independently – about 15 years ago.

Baron went so far as to pray the rosary and even starting making rosaries, including a beautiful one for her grandmother, who was then suffering from Alzheimer’s disease.

She never had the chance to give it to her, but it found good use: “I pray on it now and think of my grandmother,” Baron said. “She was the greatest influence on my life, spiritually and morally.”

For candidate Martiana Scott, 22, a senior at The Johns Hopkins University, the call to the Catholic Church was a definite “feeling” she experienced when she entered Ss. Philip and James Church in Baltimore.

Raised Protestant, Scott said she loves “feeling so connected to God,” but found that several churches did not facilitate that connection.

However, some Catholic friends involved in the school’s campus ministry program brought her to Ss. Philp and James.

“I fell in love with God all over again,” Scott said. “I knew I had to come back.”

Kyle Warner, a 28-year-old candidate who was baptized into the Baptist church, felt the spark when his brother and sister were students at a Catholic high school in his native Ohio.

“I really enjoyed how they prayed and worshipped,” he said.

Later, he moved to the Baltimore area and a friend took him to St. Casimir.

Well on his way, he has already volunteered at a Thanksgiving dinner for those spending the holiday alone in Canton, and has more plans to donate his time.

Theologically speaking, he enjoys the “traditional” aspect of Catholicism.

“It hasn’t changed – minus a couple of tweaks,” he said, adding that the structured prayer and worship style happens to suit his personality.

“It’s great for me, because I’m kind of unorganized,” he joked.

In addition to at the Cathedral, Rite of Election liturgies were celebrated at St. John the Evangelist in Severna Park, with 124 catechumens and candidates, and at the National Shrine of St. Elizabeth Ann Seton in Emmitsburg, with 76.

John Romanowsky, executive director of the archdiocesan department of evangelization, also noted that some parishes celebrated the rite on their own grounds. The Archdiocese of Baltimore has recorded a total of 801 candidates and catechumens, a number that may tick up, Romanowsky said, as Easter approaches.

Referring to the Gospel reading, Luke’s account of Jesus’ temptation in the desert by Satan, Archbishop Lori urged catechumens and candidates to reject the temptations that God doesn’t love them, or that their faith is a mere formality.

“God’s love for you and for me is for keeps,” the archbishop said. “Believe in his love, day by day, month by month and year by year, until you see our loving God, face to face.”