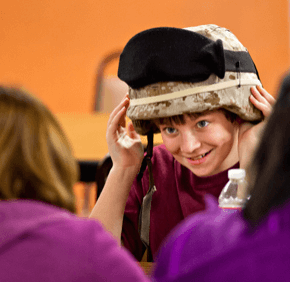 By Jessica Marsala
jmarsala@CatholicReview.org
The Catholic War Veterans understand the challenges former service members face when trying to relate to younger generations.
“We’re not identifying the same,” said Patrick Young Jr., of the gap between some veterans and their college peers.
Young, an Iraq War veteran, first enrolled at Towson University at 22 – four years older than most freshmen.
Now 30, he is one of the youngest of the 400 Marylanders in the Catholic War Veterans (CWV). Members range in age from their late 20s to 95, according to Gil Barker, the department’s commander.
Barker and Young, the coordinator of veterans services at Towson University, accompanied fellow CWV members Mark Sherman and Irv Porter as they recounted their experiences, both in uniform and out, to a group of fifth- through eighth-grade students at St. Casimir Catholic School in Canton Oct. 30.
Young is a graduate of Mount St. Joseph High School in Irvington. Sherman, 51, went to St. Casimir and then Archbishop Curley High School in Baltimore.
The CWV’s second visit to St. Casimir came during a push to attract younger members of the Iraq and Afghanistan Wars to the organization, according to Barker, who said that the recruitment of younger veterans to organizations such as the CWV has long been an “issue.”
“I like the word ‘issue’ because problem denotes there’s something wrong; issue means maybe we can push it forward,” Barker said. “I think because they (veterans) are in school, they’re building their families, they just don’t have time to do this sort of effort like we’re doing right now.”
Young, a Democrat seeking a seat in the Maryland House of Delegates in District 44B, said that challenge is not specific to the Catholic War Veterans.
“There’s a lack of participation in a lot of these organizations and a lot of it stems from they (veterans) don’t know the benefit (of membership),” said Young, who drew a parallel to his job at Towson University. “We have 300 veterans on campus. We have their email addresses, you can send out as much information as you want, but they’re already getting so much.”
Sherman suggested that the networking made possible by social media “makes ‘brick-and-mortar’ type organizations less attractive” to younger veterans.
“I’ve seen many of the younger vets,” he said, “join or form groups that create camaraderie through hiking, camping, biking and intramural sports.”
Barker seized the opportunity at St. Casimir to encourage the students to be grateful for their freedoms and the troops, as Veterans Day, Nov. 11, approaches.
In an email, Barker noted that young students today do not often know much about Korea, what he termed the “forgotten war,” and similar conflicts.
Both Young and Sherman, a veteran of Operation Desert Storm and the subsequent Iraq War, did try to bridge the gap between veterans and the students by making their experiences more relevant.
Sherman compared the oath of the Boy Scouts of America to that of the Marines and reminded the students that even their homework would prepare them for the future. Young compared the types of services that he utilized in the Marines to those that the children utilize on a day-to-day basis at school.
The Catholic War Veterans planned to attend the 8 a.m. Mass at St. Casimir on Veterans Day.
Also see:
‘The Church gave me everything I am,’ a former deputy state superintendent tells his story
PrevNext