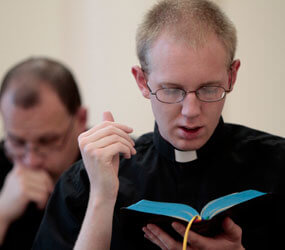 WASHINGTON – In his first months as rector of Theological College in Washington, Father Phillip J. Brown has been confronting a problem that the national diocesan seminary for the U.S. Catholic Church “has not had for a long time” – it is bursting at the seams.

Enrollment is maxed out for the 2011-12 academic year at 90 seminarians. Five of those seminarians are back in their dioceses this year gaining pastoral experience, but a Sulpician seminarian and five priests from other countries also live there, bringing the total number of residents to 91 plus faculty members.

“If I had to start with a problem, that’s the problem I’d like to have,” Father Brown told Catholic News Service. “It’s a very healthy sign, a positive sign for Theological College and for the U.S. priesthood.”

The trend of rising seminary enrollment is being duplicated around the country:

– At the Pontifical College Josephinum in Columbus, Ohio, 40 new seminarians arrived this year, bringing total enrollment to 186, the highest level since the 1970s.

– St. Paul Seminary School of Divinity at the University of St. Thomas in St. Paul, Minn., welcomed 30 new graduate-level seminarians, making its class of 100 seminarians the largest since 1980. The influx forced 24 seminarians and two priests off campus into leased space at a former convent.

– In the Diocese of Scranton, Pa., where the St. Pius X diocesan seminary closed in 2004 because of declining enrollment, the number of seminarians has more than doubled from eight to 17 in the past two years.

Most of the Scranton seminarians are studying at St. Charles Borromeo Seminary in Wynnewood, Pa., where communications specialist Dan Skalski said enrollment has remained steady over the past five years, or at the Pontifical North American College in Rome, where a class of 76 “new men” brought enrollment this fall to a full house of 250 seminarians.

In an April report, the Center for Applied Research in the Apostolate at Georgetown University said enrollment was up for those studying for the priesthood, diaconate and lay ecclesial ministry during the 2010-11 academic year – the latest for which statistics were available.

In all, there were 3,608 post-baccalaureate U.S. seminarians last year, a net increase of 125 seminarians, or 4 percent, over the previous year and the highest number since the early 1990s. More than three-quarters of them were studying for the diocesan priesthood, while 24 percent intend to be ordained for religious orders.

The trend goes beyond Catholic schools to all seminaries, according to figures from the Association of Theological Schools in the U.S. and Canada from 2010-11.

The organization that accredits theological schools said 75,431 people were studying for the ministry at 261 institutions during the last academic year, an increase of .6 percent from the year before.

But Theological College’s Father Brown said a rise in enrollment is only part of the story.

“It’s not just the numbers but the quality and spirit of the men who are coming,” he told CNS.

“I’m tremendously impressed with the quality of the candidates, their zeal,” he added. “We’re seeing a real renewal of the priesthood.”

Having more applicants than Theological College can accept also benefits some of the seminarians, who might be referred to a school “better suited to the candidate’s academic achievements and aptitudes,” he said.

Because its seminarians participate in “an exacting and demanding program” at The Catholic University of America, Father Brown said, Theological College accepts those candidates considered most likely to succeed in a rigorous academic environment.

“As the numbers seem to be increasing for all major seminaries, it’s easier to have a more cooperative relationship” among the schools, so that seminarians end up at the seminary that will benefit them the most, he added.

But he said those at Theological College never lose sight of the fact that “our goal is not to produce academicians or intellectuals but to provide good pastors for parishes.”