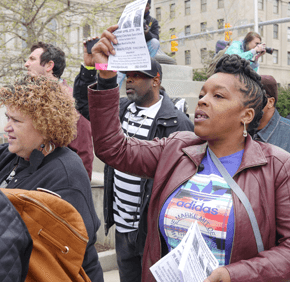 Long before the death of 25-year-old Freddie Gray, who succumbed April 19 to injuries his family says were sustained while in police custody, Baltimore’s Catholic institutions had been grappling with the issues illuminated nationally by this most recent tragedy.

“Unfortunately, my students – and even I, old as I am – have been dealing with the fear of police for a while,” said Deacon B. Curtis Turner, principal of St. Frances Academy, “even though the larger community is just becoming aware of it.”

He stressed that he was not condemning the police.

“Honestly, 99 percent of the time they’re there to help, but that one percent is potentially lethal, and that’s why we can’t ignore it,” he said.

Deacon Turner actively maintains a dialogue between the mostly African-American students at his high school and Baltimore police. It is not uncommon to enter the school building on E. Chase St. near Greenmount Ave. and see five uniformed police inside.

“They’re in here at least once a week now,” said Deacon Turner, who recently established a Baltimore Police Department Explorers group at the school, with assistance from Lt. Col. Melvin Russell, head of the police department’s Community Partnerships Division.

“It’s about relationships,” he said. “What we don’t have in Baltimore – at the level that’s desired – are good relationships between community and law enforcement.”

Ross suggested that those relationships could be improved through “community policing.”

“Police have to get out of their cars, leave the station and actually do a better job of being on foot and engaging community members where they are,” he said. “Do more of that trust-building, where police are not seen as the enemy. If they’re only called when there is trouble, we’re going to continue to have the struggle.”

Vincentian Father Eugene Sheridan, pastor of two parishes – Immaculate Conception and St. Cecilia – within two miles of the scene of Gray’s arrest, said that his homily of April 19 had touched on the “fear rather than trust” evident in the relationship between some city residents and the police.

At that point, Father Sheridan had not yet heard news of Gray’s death, but on April 16 he had attended a forum at Coppin State University sponsored by the U.S. Department of Justice to discuss residents’ complaints against the Baltimore Police Department.

“They really got an earful with great emotion,” he remembered. “There was a lot of concern from parents, particularly for boys in the family.”

“I guess no one knows exactly what happened (to Freddie Gray), and that’s the problem,” Father Sheridan added. “You don’t want to make false accusations, but there is police brutality in the community at times. That’s what I heard the week before.”

Father Sheridan expressed the importance of prayer – as well as action – in the face of all violence.

“I do believe Christ is the one who has conquered these things, and we need to connect with him,” he said.

On April 23, a group of faith leaders that included the Baltimore Interfaith Coalition, co-chaired by Bishop Denis J. Madden, issued a statement on the “current crisis” in Baltimore.

“The latest incident threatens to deepen the divide between the community and law enforcement,” the statement says, “and, regardless of the eventual outcome of the current investigations, prompts renewed questions about how the Baltimore City Police relate to citizens in certain areas of the city.”

The statement goes on to say that, though “deeply troubling” and deserving of intense scrutiny, “these issues are but symptoms of much larger problems plaguing our city” and “will not be satisfactorily resolved until every man, woman and child in our city and nation are treated with the human dignity deserving of all God’s children, and until all vestiges of the sins of discrimination, prejudice and racism are wiped from the face of the earth.”

The faith leaders offered condolences to Gray’s family and friends, and prayers for all involved in the tragedy, including Mayor Stephanie Rawlings-Blake, Police Commissioner Anthony Batts, the six officers suspended pending the investigation, and Gray himself.

The statement also commends “the many citizens who have turned out in protest over these past several days for their peaceful demonstrations and restraint.”