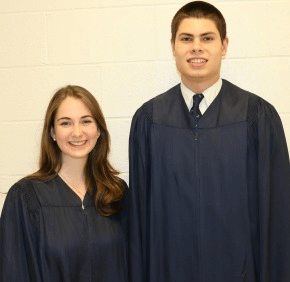 By Paul McMullen
pmcmullen@CatholicReview.org
Twitter: @ReviewMcMullen
How rare is the academic resume of Sarah Perumattam?

She’s the president of the Student Council at The Catholic High School of Baltimore, drawn there by its STEM program, which has already helped her study at the University of Maryland School of Engineering and log in as a summer lab intern with the National Institute of Drug Abuse.

Then there is her fluency in Spanish; her volunteer hours with Esperanza Center and Sarah’s House, two Catholic Charities of Baltimore programs; and the skill at volleyball that made her an Interscholastic Athletic Association of Maryland all-star.

There were others with similar credentials at the Archdiocese of Baltimore’s 24th annual Distinctive Scholars Convocation April 4, but Perumattam is unique among the thousands of young women who have come through Catholic High, as she will be the first of its graduates to matriculate to Brown University, an Ivy League institution in Providence, R.I.

How many hours of sleep a night does she get?

“Not enough,” Perumattam said with a laugh.

She came to Catholic High from St. Jane Frances School in Riviera Beach. She was raised in Our Lady of the Chesapeake Parish in Pasadena, and in a household that values intellectual rigor.

Both of Perumattam’s parents, who met in their native India, work in medical fields. Her older sister, Monica, a 2014 grad of Catholic High, is a student at Washington University in St. Louis, annually ranked one of the nation’s top universities.

“There’s a pre-engineering program at the University of Maryland, it involves training and mentoring,” she said. “I went there twice a month during my junior year, with a full day of class on Saturday. I lost part of my weekend, but it was a cool experience.”

For her senior project at Catholic High, Perumattam and Emma Stinson built an iPhone app that promotes environmental sustainability by directing users to local farmer’s markets and such.

Three students from each of the 20 high schools in the archdiocese were honored in the April 4 convocation at Mercy High School, which included a vespers service led by Bishop Denis J. Madden and words of congratulations from Dr. Barbara McGraw Edmondson, superintendent of Catholic Schools.

Three students from each of the 20 high schools in the archdiocese were honored April 4 as Distinctive Scholars for the Archdiocese of Baltimore. (Kevin J. Parks/CR Staff)
Two scholars from St. Frances Academy in Baltimore will strengthen its connection with St. Michael’s College in Colchester, Vt., the only college in the world founded by the Society of St. Edmund, a Catholic congregation.

Aaron Greene and Charles Thompson will add to that legacy at St. Michael’s, both as Presidential Scholars. Both are members of the Mother Mary Lange Chapter of the National Honor Society at St. Frances Academy, where they are known for their leadership. Greene will study computer science, Thompson biology.

The program for the convocation included a brief bio for each of the 60 students, written by a faculty member.

Keira Mull holds the highest GPA at St. John’s Catholic Prep in Buckeystown, is vice president of the National Honor Society and captain of the cheer team. Her bio also mentioned her “sardonic humor.”

“That was probably written my Mr. Van,” she said, referring to Tim Van Schaick, who chairs the social studies department and also teaches theology.

A parishioner of St. Katharine Drexel in Frederick, Mull counts meeting Archbishop William E. Lori among her Catholic school highlights. She’s been accepted by all three of the state’s Catholic universities, in addition to The Catholic University of America in Washington, D.C.

Want your son to be a Distinctive Scholar? Consider the name Nicholas