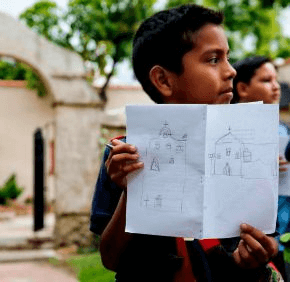 PHOENIX – California Catholic leaders will revamp church curriculum and museum programs on the California mission system to more accurately present history, the perspective of California Indians and the missions’ impact on Indian life.

“We have told the story of the missions in a way that has shown them as harmonious. In reality, conquest does not work that way,” said Los Angeles Auxiliary Bishop Edward W. Clark, one of several people working on the project. “We see weakness in our curriculum on the mission era. We want to strengthen that.”

Pope Francis will canonize him during a Sept. 23 Mass in Washington.

Many Native Americans and organizations have criticized the upcoming canonization, saying that Blessed Serra was part of a system that destroyed Indian life.

“The Indian experience has been ignored or denied, replaced by an incomplete version of history focused more on European colonists than on the original Californians,” said the president of the California Catholic Conference, Sacramento Bishop Jaime Soto, in a Sept. 4 statement on the curriculum and cultural review.

“The time has come to confront that incomplete history and to work with Native American educators, respected historians, Catholic school officials and others to change that and to reflect the best scholarship we can about that era,” added Franciscan Father Ken Laverone, provincial vicar of the Franciscan Province of Santa Barbara, and co-postulator in the cause of Blessed Serra.

With backing and oversight of the Spanish crown, Blessed Serra founded nine missions in California between 1769 and his death in 1784. Another 12 were erected after his death.

Before Spanish colonization, Indians in California numbered more than 300,000. By 1860, there were just 30,000, a consequence of diseases that had been unknown there before the Europeans’ arrival, assimilation, the influx of gold miners and other factors. Franciscan missionaries had baptized around 80,000 California Indians. Historians say that by 1834, 60,000 of them had died.

Two church committees – one looking at Catholic school history curriculum for third and fourth graders, and the other looking at mission displays and programs – will review and revise materials to “better reflect modern understandings of the mission era and the relationship between Spanish civil authority, the Catholic missions and local Indian tribes,” said the statement.

Following the committee work, new guidelines will be presented to archdiocesan and diocesan leaders and educators through the California Catholic Conference, Bishop Clark said.

He said descendants of mission Indians make up part of each committee, and access to missions by California Indians is one issue they will consider.

Andrew Galvan, an Ohlone Indian Catholic and curator of Old Mission Dolores in San Francisco, heads the committee on cultural review of mission exhibits. Earlier this summer, he told Catholic News Service that he is dismayed by how Indians are treated and represented at the missions.

He said he is “outraged” when he walks up to a mission, one that his ancestors likely built, and he is told, “That will be $5 to get in.” Or when a mission guide says, “The padres built the missions.”

“Could we simply get every guide in California that gives a tour at a California mission to say it this way, ‘The Indians, under the supervision of the padres, built the missions?’“ he asked.

In the first 60 years of the missions, every baptism, marriage and funeral is of an Indian. Indian burial grounds are located at the missions.

“So the mission churches are churches built by Indians, before anything else, used by Indians before anyone else,” Galvan said. “But today those same people feel so unwelcome to come there.”

He said the church today is asking, “What can we now do to invite and to happily have native people come to the places that they built?”

The California Catholic Conference is the public policy arm of the Catholic bishops of the Los Angeles and San Francisco archdioceses and the state’s 10 dioceses.

The Franciscan province administers three of the 21 California missions. Sixteen have oversight by the dioceses within which they are located. Two missions are state parks and not active churches.

Serra’s legacy complicated by practices, conflicts of his time