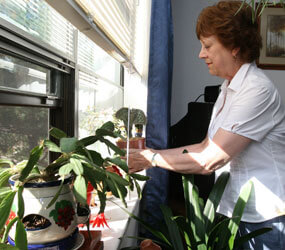 “I just love it here,” said the 75-year-old widow who 16 months ago moved into the DePaul House, part of Catholic Charities’ Jenkins Senior Living Community located behind the St. Agnes Hospital campus on S. Caton Avenue in Baltimore.

Retired for some eight years after working in and then owning a jewelry shop, Coomes had been living in her two-story house in Halethorpe which she shared with her son. But when he moved out to get married she found that, “what with my bad hip and back,” the upkeep of the house was just too much for her – and she was alone, and not liking it.

She wasn’t sure what other kind of more manageable living arrangement she should make until she heard from a former neighbor who had moved to DePaul House not long before.

“She made it sound so wonderful that, before I knew it, I moved in too,” Coomes said. “I only regret I didn’t do it a lot sooner.”

What she found when she first settled into her “cozy,” flower-filled one-bedroom apartment was “a very warm, very friendly” environment, she said.

“People came up to me and introduced themselves; they were all so nice and welcoming and I quickly made a lot of friends, some of them who are now very close friends,” Coomes said.

And, Coomes said, thanks to Catholic Charities’ rent assistance program, her new home is very affordable. “God only knows, it’s like a real refuge,” she said.

Although she takes pain pills for her sore hip and back, Coomes is perfectly mobile and, she said, devotes a good bit of her time to helping more elderly neighbors who can’t get around so well.

In many ways, her life is now more active than when she lived alone in her Halethorpe home and, as she put it, “in a much more fun way.”

“There’s always something going on, something to do, and really nice people to do it with,” she explained.

Although she takes some meals, usually “lunch with the girls,” in the dining room, she enjoys cooking and baking in her own apartment kitchen. Recently she prepared almost 100 cup cakes for a residents’ Halloween party.

In fact, she said, “it seems as if there’s always some kind of party going on here and we’re preparing and decorating all the time; and it’s a lot of fun especially when you’re doing it with friends.”

“She’s a real card,” said Kristin Hynd, the DePaul House housing associate, and she’s made a big hit not only with the residents but with the staff too. And she has her own fan club here.”

In fact, said Hynd, Coomes is a “laughter leader” on the residents’ frequent sightseeing and shopping bus trips.

“I try to make fun wherever I go,” Coomes said, “because they say people who don’t laugh much don’t live as long. But, I don’t play bingo. That’s for old people,” she added with a chuckle.

“Does this place improve the quality of my life? Heavens, yes. I think that’s why some people die early is because they have nothing to live for, but I do, and that’s what I get from living here.”