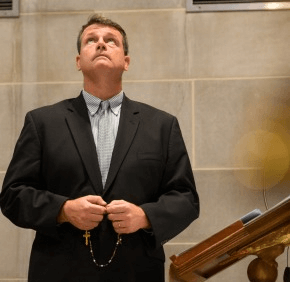 ezygmont@CatholicReview.org
Twitter @ReviewErik
“It’s not often in this church we have to point seats out to people,” remarked Father Andrew DeFusco, on a Friday afternoon no less, as he surveyed the sizeable group gathered in the Lady Chapel of the Cathedral of Mary Our Queen Oct. 7 for 5:30 p.m. Mass followed by a recitation of the rosary.

The extraordinary crowd of more than 100 – which actually spilled outside of the chapel – prayed an extraordinary rosary, created by the parish’s men’s club, the Men of the Cathedral of Mary Our Queen.

As in the traditional rosary, the Men of Virtue rosary has five decades of the Hail Mary, each including a meditation on a Gospel event.

These events or themes, however, illustrate five virtues that the men’s club has identified as crucial for Catholic men today.

According to Michael Skinner, a co-leader of the club, the beginnings of the rosary originated at a January men’s retreat at the Malvern (Pa.) Retreat House.

A man prays the rosary at the Cathedral of Mary Our Queen in Homeland Oct. 7. (Kevin J. Parks/CR Staff)

“That place is a wonderful place – a wonderful, blessed place – for Catholic men,” Skinner said. “We were inspired there to understand the model Christ prepares for us as men.”

The group, which is about a year old, already had a special devotion to the Blessed Virgin Mary and the rosary.

“We took a page from St. John Paul II, who gave us the Luminous Mysteries,” Skinner said, explaining the innovation. “And St. Faustina, of course gave us the Divine Mercy chaplet.”

“We felt like everything Christ did provides a lesson for us,” he continued. “We found these lessons for men, and the rest is history, as they say. It came together very quickly.”

The club has produced a booklet that includes the virtues, Gospel events and meditations as well as inspirations from the lives of saints that embody the virtues.

The men’s club holds up St. Joseph, for example, as a paragon of gallantry. St. Paul, who traveled the world at his peril to spread the Good News, embodies zeal.

Skinner said that the world is now more than ever in need of virtuous Catholic men.

“All you have to do is pick up a newspaper or turn on the TV – there are so many challenges we face,” he said, adding that men are called to support their wives and children, keeping the family safe and viable.

The booklet, including illustrations taken from the stained glass of the cathedral, is available at cathedralofmary.org/mens-club.

“We want this in the hands of as many men as possible,” Skinner said, adding that the men’s club was, to that end, partnering with the Archdiocese of Baltimore, and possibly the Catholic Men’s Fellowship of Maryland.

The crowd at the Men of Virtue rosary debut – which was on the feast of Our Lady of the Rosary – included men and women, young and old.

“Let’s pray the rosary today, for our world that needs peace, and our country that needs wisdom,” said Father DeFusco, associate pastor of the cathedral. “We do pray in a special way for the men in our church and men in the archdiocese, that they be humble, zealous, loyal and gallant – that they be men like Jesus.”

Parishioner Mark Lowitt, who was received into the Catholic Church this Easter, called praying the Men of Virtue rosary “a beautiful experience.”

“I’m amazed these guys put together something so relevant and personal, and just so beautiful,” he said.

Skinner thanked Father DeFusco and the cathedral rector, Monsignor Richard W. Woy, for their support, and he gave the bulk of the credit to the Holy Spirit.

“We were inspired,” he said. “We’re just so thrilled with how this rosary is being received.”