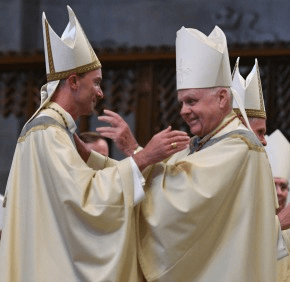 By Christopher Gunty and Paul McMullen
Conventual Franciscan Father Matthew Foley, the campus minister for Archbishop Curley High School, wore his sandals.
Jesuit Father Brian Linnane, the president of Loyola University Maryland, parked at its fitness center and hiked up Charles Street, sans coat.
It was that kind of an episcopal ordination for the Archdiocese of Baltimore Jan. 19, as fears of a repeat of 2016’s “Snowzilla” melted in a sunny day with highs in the 50s that added to the warm spirit surrounding Bishops Adam J. Parker and Mark E. Brennan at the Cathedral of Mary Our Queen in Homeland.
“When I first heard the date of the ordination (announced Dec. 6), I was really concerned that snow would put a damper on today,” said Monsignor Richard W. Woy, rector of the cathedral. “We’ve been blessed in so many ways.”
How nice a day was it? A half-dozen doors were open at the cathedral.
No one was more appreciative with the break in the weather than Monsignor Woy’s fellow clergy.

While most were priests and deacons of the archdioceses of Baltimore and Washington, two dozen prelates came from throughout the United States, and in the case of Cardinal Edwin F. O’Brien, Baltimore archbishop emeritus and grand master of the Equestrian Order of the Holy Sepulcher, Rome.
Cardinal O’Brien, mentor to Bishop Parker and one of the co-consecrators, was visibly touched when he embraced his former priest-secretary after the ordination rite.
“I was speechless – filled with emotion,” he said. “It’s a happy day for everybody. … It’s a good sign of the church’s unity and mission and the joy which is at the center of the faith was just overflowing in there.”
He said Bishop Parker seemed comfortable in his new responsibilities. “It’s just amazing how he fits into the role. All his life he has done that – always fits right in, always taking charge in the way of service.”
The cardinal noted that the new bishop is well grounded. “I think his family has kept him honest. They’re very close and very frank. His mother is the stalwart of the lot of them.”

Cardinal Timothy Dolan of New York, second from right, has a playful moment before the ordination Mass with three men who were seminarians when he was rector of the Pontifical North American College in Rome and have now become bishops. With the cardinal are (from left) Bishop Steven J. Lopes of the Personal Ordinariate of the Chair of St. Peter; Bishop Adam J. Parker, auxiliary of Baltimore; and Bishop Gregory L. Parkes of the Diocese of St. Petersburg. (Kevin J. Parks/CR Staff

Cardinal Timothy Dolan of New York was rector at the Pontifical North American College in Rome when Adam Parker was a student seminarian in the late 1990s. But he has known him even longer than that.
“I knew him when I had the thrill of helping out at Our Lady of the Fields in Millersville (the Parkers’ home parish) when I was a graduate student at The Catholic University of America from 1979-1982,” Cardinal Dolan said. “It was good to see some of the people from the parish at the Mass.”
Bishop Parker is the third of the seminarians from Cardinal Dolan’s time as rector of the NAC to become bishops. The others, both of whom attended the Mass, are Bishop Gregory L. Parkes of the Diocese of St. Petersburg, and Bishop Steven J. Lopes of the Personal Ordinariate of the Chair of St. Peter.
“It makes you feel like a veteran when you have a fellow from the parish you were assigned is ordained a priest, but to have a young man who was a seminarian ordained (a bishop) – it’s a great feeling of pride and gratitude and yet a little bit of somberness in knowing how old I’m getting.”
The New York prelate noted that a day that includes the ordination of two new bishops is good for the church and for vocations. “Whenever you see the fraternity of the priests exemplified in prayer and joy, it’s contagious. It’s good for us as priests, it’s good for God’s people, and joy attracts, so it’s good for other young men who might say, ‘Boy, I wouldn’t mind being part of that.’” he said before the Mass, a day before he was to read from the Book of Wisdom at the inauguration of President Donald J. Trump.
He said the episcopal ordination would be a “booster shot” for seminarians of the archdiocese. He also saw many of the alumni from his time at the NAC, now priests, waiting to process into the cathedral, “and here they are celebrating. And they’re just so happy, you know? And we need that. That’s good for us.”

Cardinal Donald W. Wuerl of the Archdiocese of Washington, from which Bishop Brennan comes, was also a co-consecrator. After the Mass he reflected on the long line of successors to the Apostles that Bishops Brennan and Parker joined.
“The joy was recognizing that the wonderful line going all the back to the Apostles continues into a new generation,” he said. “Seeing that confirmed by the laying on of hands and holding the Gospel book over the heads of the new bishops made visible what Christ intended when he formed the college of apostles and sent them out, and the church continually renews that college by ordination.”
He said it is no coincidence that both bishops’ mottos relate to evangelization: Bishop Parker selected “Go Make Disciples” and Bishop Brennan chose “Docete Omnes Gentes,” Latin for “Teach All Nations.”
The church today, beginning with the ministry of Pope Paul VI and accentuated by St. John Paul II, Pope Benedict XVI “and now, of course, certainly Pope Francis, the whole emphasis has been on moving from a church of maintenance to an outreach to bring more and more people to the experience of Jesus,” the cardinal said.

“That’s what the new evangelization is all about,” Cardinal Wuerl said. “And I think it is not a coincidence that both of those bishops chose to speak about that.
“They are bishops of this moment in the face of the needs of the church today.”
The 21 archbishops and bishops who concelebrated included Springfield (Mass.) Bishop Mitchell Rozanski, a Dundalk native who served his home archdiocese as an auxiliary from 2004 to 2014.
Bishop Rozanski planned to be in Baltimore for three nights. His father is recovering from a stroke, and he was happy to check up on him and share in the day.
“The weather just adds to the beauty of the day,” Bishop Rozanski said. “To have two such men of faith in service to the archdiocese, I’m happy for the archdiocese. I’m also happy for Archbishop Lori and Bishop Madden, that they’ve added such wonderful co-workers to assist them in their ministry.”
The Gospel was proclaimed by Deacon Siegfried Presberry, archdiocesan director of Prison Ministry.
“When I got the call from Father (Louis) Bianco,” said the deacon, of Archbishop Lori’s priest-secretary, “I said ‘Wow.’ I hurt my back lifting weights and had a doctor’s appointment scheduled today, but that can wait. I’m still excited. It brought back memories of my own ordination.”

Let us rejoice and be glad’: Two ordained as auxiliary bishops for Baltimore Archdiocese

For more stories on the new bishops, click here.  For more photos, visit our Smugmug page.