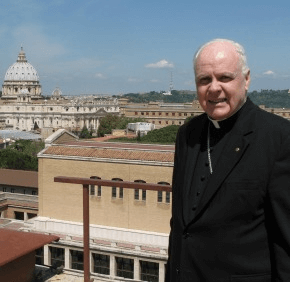 SEVERN – When the phone rang at Archbishop Spalding High School in Severn today, it was Cardinal Edwin F. O’Brien on the other line.

Approximately 50 juniors at the co-ed school crammed into a classroom and listened intently as Cardinal  O’Brien, archbishop emeritus of Baltimore, discussed his recent three-day pilgrimage with Pope Francis to the Holy Land.

Cardinal O’Brien called the Anne Arundel County school from New York May 29 to talk with students during their Christian morality class.

Cardinal O’Brien accompanied Pope Francis to the Holy Land May 24-26, where the Holy Father met with Muslims and Jews and called for closer relations among the three major monotheistic religions to help bring peace to the region.

The pope also called for religious freedom in the Middle East.

Cardinal O’Brien, who said he was the only American on the papal trip, fielded questions from students.

Patrick Brady, chairman of religious studies at Archbishop Spalding, asked the cardinal about how the pope has been able to capture the world’s attention.

“What you see is what you get,” Cardinal O’Brien said. “He’s down to earth. His humble lifestyle I love. People see a refreshing, honest voice.”

Brady also asked what students can do in support of Pope Francis’ call for peace. The cardinal encourages them to keep abreast of the news and pray.

Junior Kaemyn Pizarro asked the cardinal what he likes about being in Rome and what he misses about Baltimore.

“These monuments to history and faith are staggering, really,” he said. “I never get used to it. The roots of our faith are so strong there.”

He praised the clergy in the Archdiocese of Baltimore, as well as the faithful’s love of the church.

“The priests are marvelous,” Cardinal O’Brien said. “People in Baltimore have great respect for the church.”

“He’s had experiences with the pope, first-hand,” said Pizarro, a parishioner of Holy Trinity in Glen Burnie.

“His advice was to go out and be active in the community and the church,” Pizarro said.

“It’s kind of a big deal,” said McNellis, a parishioner of Church of the Ascension in Halethorpe.

Junior Giuseppe Vitale, a parishioner of St. John the Evangelist in Severna Park, said while the faithful routinely interact with priests and bishops, it’s not every day they talk to a cardinal.

“He wanted to take the time to talk to us,” Vitale said.

Brady, the religious studies department chairman, liked that Cardinal O’Brien stressed the importance of prayer as a way to help bring about change when he talked about the conflict in the Middle East.

“It was a stark reminder that there’s so much more going on in our world,” he said. “My hope, always, for the kids is to understand how important prayer is. That was his message – prayer.”