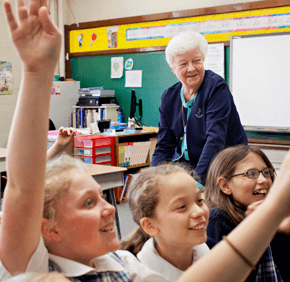 By Elizabeth Lowe
elowe@CatholicReview.org
PARKVILLE – Walking through the halls of St. Ursula School May 7, Sister of Notre Dame de Namur Joan Kelly greeted the students she passed by name, stopping to hug some of them.
“Education has been my joy,” said Sister Joan, principal of the Parkville school for 28 years. “It’s something I’ve loved.”
Sister Joan will retire June 30. She has been an educator for 55 years and a religious sister for 58 years.
“There’s a time for everything,” said Sister Joan, 75. “It’s time to move on.”
Before coming to St. Ursula, Sister Joan taught for 27 years at schools in New York, Pennsylvania and Washington, D.C.
“I’m a teacher, first and foremost,” she said.
When Sister Joan arrived at St. Ursula in 1986, the parish school didn’t offer Spanish classes, pre-kindergarten, kindergarten or extended day programs. There were 370 students in grades 1-8.
Since 1993, the school has had more than 600 students, Sister Joan said. Forty-four of the current 647 students are the children of alumni who attended St. Ursula during Sister Joan’s tenure, including seventh-grader Kaila Marcozzi.
“There’s so many students and she takes the time to know your name,” said Kaila, whose mother, Jessica Gossman, is a St. Ursula alumna. “It makes you feel important.”
Kelli McCarty, 33, attended St. Ursula for grades 1-8, all during Sister Joan’s tenure. Sons Gavin and Connor are in kindergarten and fifth grade, respectively.
“She truly puts the kids, as well as their families, first,” said McCarty, a member of St. Ursula’s mother’s club. “She is leaving behind a sense of family. We are all the same, we are all one family. We work together. She is truly the mother hen of the school.”
Theresa Fifer, a St. Ursula kindergarten teacher for 26 years, is the mother of three St. Ursula graduates, ages 36, 34 and 32. Fifer described Sister Joan as a visible leader, who greets students as they climb out of their cars each morning and directs traffic in the afternoons.
“She’s extremely energetic,” Fifer said. “She is disciplined dealing with children and faculty. I’ll miss the comfort of knowing she understands her teachers and faculty.”
Sister Joan has a sterling memory, said Father Stephen E. Hook, pastor of St. Ursula.
“She’s good at recalling kids’ names,” he said. “It was a big help for me if I had a question about a family or a person. It made my transition a lot easier.”
Her legacy is a well-run school, Father Hook said.
“It’s more than community,” he said. “It comes across as being a family and people try to take care of each other. There’s a strong sense of family fostered because of her.”
Sister Joan said while she has helped lay a strong foundation, “no one person does anything.”
“It’s a very strong community,” she said. “The parents are very involved in the school, the grandparents are very involved.”
Sister Joan considers her legacy the establishment of a program for students with special learning needs, which began about 25 years ago.
Next month, Sister Joan will share with the community her plans for the future. However, she isn’t going far; she resides at the convent adjacent to the school.
John D’Adamo, assistant principal of Immaculate Conception School in Towson, has been named St. Ursula’s new principal. He will be the school’s first lay and male principal.
“I’m blessed with being the one to take on the task of securing her legacy for future generations,” he said. “It’s a tremendous privilege to build on a strong foundation.”
Also see:
Christian life may be joyful, but it’s not always a party, pope says
A pastoral priest: Baltimore’s Bishop Newman marks 60 years of priesthood
When the phone rang at Archbishop Spalding, it was Cardinal O’Brien on the line.
PrevNext