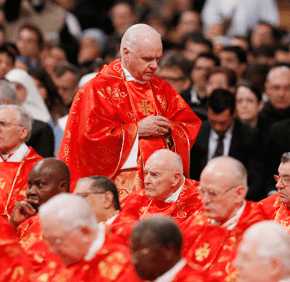 By Christopher Gunty
editor@CatholicReview.org
The surprise election of Pope Francis – formerly Cardinal Jorge Mario Bergoglio of Buenos Aires, Argentina – came about because the cardinal electors were open to the will of God, and was “good news, good news,” according to Cardinal Edwin F. O’Brien, archbishop emeritus of Baltimore, who participated in the conclave.
The humble man they elected as pope continued his simple ways in the first hours and days after his election. Asked whether the days were over of Pope Francis riding the bus or cooking his own meals as he did when he was archbishop in Argentina, Cardinal O’Brien said, “No, when we came out of the papal apartments tonight (March 13, after a dinner of the pope and the cardinals), his limousine was waiting and he chose to take the bus with us back to our apartments” in the Domus Sanctae Marthae.
The next day, the pope went to the guest house where he had been staying in Rome, before the conclave, to pick up his personal items and settle his bill.
The election was “a surprise to everyone, I think,” Cardinal O’Brien said a few hours after the pope was introduced on the balcony of St. Peter’s. “This thing just kind of steamed up like the Spirit and before you knew it people were talking about him through last week. It was just extraordinary. There’s no doubt this has been an inspired choice by the Lord,” he said in a phone interview from his office in Rome where he is now grand master of the Equestrian Order of the Holy Sepulcher of Jerusalem
Noting that it was “anybody’s guess” who the next pope would be as the cardinals went into the general congregations – meetings including the non-voting cardinals about the status of the church – and the conclave itself, he said he was impressed at how the cardinals were grounded in prayer. “Their sense of providence and prayer was just moving, and that’s what pulled us through. They were open – open to the will of God.”
Although the outcome was uncertain heading into the conclave, support for Cardinal Bergoglio grew, even though not by anything he did to promote himself, Cardinal O’Brien said, citing his humility.
“I think he would rather fly back to Argentina tomorrow. (But) this is what he sees as God’s desire for him. We’re going to see a lot of good things coming,” he said.
Pope Francis made clear to the cardinals that he chose the name as a tribute to St. Francis of Assisi, a man of the poor.
“St. Francis of Assisi being the patron of Italy doesn’t hurt either,” Cardinal O’Brien noted, but the new pope’s lifestyle and concern for the poor “zeroes in on Francis.”
He said the new pope brings with him a lifelong ministry and great respect for his character in the Archdiocese of Buenos Aires, in his country and on the continent of South America, where he has had great responsibilities. He also played an important role in the World Synod of Bishops a few years ago.
The new pope was present for all the days of the meetings before the conclave, so he has already heard a lot about the state of the church, even though he was not expecting to be elected.
“We’ll see what road he takes, what he does, what he chooses to do,” the cardinal said.
During the congregations, all the cardinals, including the future pope, heard about the concerns of the church today, “positive and negative. Not just problems here and problems there; that’s what people like to focus on,” Cardinal O’Brien said.
Pope Francis, he said, “heard from all kinds of cardinals about the good of the church that’s not being recognized and he is a great example of that. I don’t think he’ll have to preach about that; he’ll show it in his own ministry as the successor of Peter and he will have many witnesses to back that up from his past.”
The church owes a great debt of gratitude to retired Pope Benedict “for allowing this to happen,” by renouncing the papacy when he felt he could no longer serve well, the cardinal said.
He said it was wonderful that Francis’ installation as pontiff was planned for March 19, the feast of St. Joseph, universal patron of the church. He said it also might give the pope’s friends and family a chance to arrive from Argentina. “He’s not going to see his home for a long time – a great sacrifice,” the cardinal said, acknowledging that the pope might schedule a visit to his homeland before or after World Youth Day in July in Brazil.
The day after his election, Pope Francis asked the nuncio in Argentina to encourage priests, religious and laity there not to come to Rome for his installation, but instead stay close to him spiritually and make a contribution to the needy.
Cardinal O’Brien said although the conclave was brief – about 27 hours from the start to the election – it felt a lot longer. Sounding emotional over the phone at nearly midnight Rome time, he said, “It was very exhausting really because you’re so concentrated and felt so responsible for what you are doing for the church and what you should be preparing to do for the church.
“There was great prayer, and prayer from all over. I’ve gotten correspondence from people wherever I have served and certainly a ton of them from Baltimore. It was great to have them all assuring me of prayers,” he said.
Related article:
Archbishop Lori impressed by new pope’s concern for poor
Copyright (c) March 16, 2013 CatholicReview.org
PrevNext