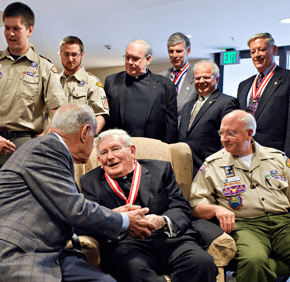 By George P. Matysek Jr.
gmatysek@CatholicReview.org
CATONSVILLE – Joining the ranks of previous honorees including Charles Lindbergh, John Glenn, Hank Aaron, Bob Hope and 14 U.S. presidents, Cardinal William H. Keeler was presented with the Silver Buffalo Award – the highest commendation given by the Boy Scouts of America.
The honor was presented April 12 at St. Martin’s Home for the Aged in Catonsville, where the 82-year-old retired Archbishop of Baltimore and former Boy Scout resides.
Gary Butler, Assistant Chief Scout Executive, noted that there were only 12 Americans honored this year with the Silver Buffalo Award – a commendation established in 1925 and bestowed on those who provide “noteworthy and extraordinary service to youth.” Awardees are selected from more than 1.5 million volunteers.
Butler pointed to Cardinal Keeler’s role as chairman of the Catholic Church’s eighth World Youth Day, held in Denver 20 years ago, as one of the cardinal’s key contributions to young people.
In his 18 years as head of the Archdiocese of Baltimore, the cardinal also provided numerous opportunities for young people to grow in their faith and learn from other cultures. He established the annual Youth and Young Adult pilgrimage, an annual gathering held the Saturday before Palm Sunday, that allows hundreds of youths to listen to faith testimonies and process through the streets of Baltimore carrying a large cross.
Cardinal Keeler, who earned his Eagle Scout badge in 1951, has previously been honored by the Boy Scouts with the Silver Beaver Award, Silver Antelope Award and the Distinguished Eagle Scout Award.
“I also found it interesting that he was presented the Shofar Award by the National Jewish Committee on Scouting,” Butler said, “in recognition of the cardinal’s tireless work in the area of Catholic-Jewish relations.”
Henry Rosenberg, a close friend of the cardinal, said Cardinal Keeler made “substantial contributions to millions of young people across our country.”
As Bray Barnes and James Wilson of the Boy Scouts presented a medal and certificate to the cardinal, the honoree bowed his head and, in a hushed voice, repeatedly said, “Thank you.”
Copyright (c) April 12, 2013 CatholicReview.org
PrevNext