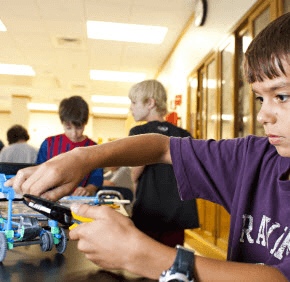 TOWSON – Looming over Charles Street, Wheeler Hall appears to motorists much as it did when it was constructed in 1934, during the Great Depression.

Step inside the Butler stone of Loyola Blakefield’s signature building, however, and it is very much 2012, with recent renovations that include expanded access and a state-of-the-art language lab.

This isn’t an anomaly.

“One of the first things you notice on campus is construction,” said Jesuit Father Thomas A. Pesci, Loyola’s president from 2005 to June 30.

The renovation of iconic Wheeler Hall is part of Vision 2020, a capital campaign that Father Pesci said is anywhere from five to 10 years from completion. The “broader vision” is for the school’s facilities to “clearly reflect the nobility of a Jesuit school,” said Father Pesci.

“It’s a long-range vision,” he said. “You have to have dreams, right?”

Wheeler Hall, which retains its historic feel, reopened last September, just as the 2011-2012 school year was gearing up.

An elevator, stairwell and classrooms were added. The electrical and plumbing systems were updated, and air conditioning was finally installed. The windows were replaced, and the writing and media centers feature modern technology.

“The renovation preserved the sense of space and identity while bringing it up to the 21st century,” Father Pesci said.

Vision 2020 includes the planned renovation of the middle school complex, but it isn’t restricted to academic halls.

Hardagen Field, Loyola’s stadium, is getting synthetic turf, which should be ready for use in October, said John H. Weetenkamp III, interim president for the 2012-2013 school year.

A search committee for a successor to Father Pesci, who remains in Baltimore, was formed in January. Until a permanent president is named, Weetenkamp said Loyola will “probably not, in a very active public way for this year, be moving the campaign forward.”

In addition to serving as interim president, Weetenkamp, a 1965 graduate who has served his alma mater for more than 40 years, is also the “director of the work,” the Jesuit term for the leader of Loyola’s Ignatian mission. His interim duties began July 1.

“I want to try to engage as many of our constituents as possible and just be a cheerleader for our school,” Weetenkamp said. “Whenever there’s transition, for some people, it can be a time of some concern. The school is in a very good place and is going to continue (to be).

“Loyola is continuing to be the Loyola Blakefield that people in the Baltimore area know.”

While staff and campus facilities change, some things endure: the motto remains “Men for Others” and students continue to wear blazers and ties.

“That sense of tradition is important and it has been,” Father Pesci said.

Asked if Loyola aspires to be the best Jesuit high school in the U.S., Father Pesci said striving toward that in a traditionally competitive Baltimore market can be achieved with the attitude that “we can do better, to never be complacent.”

Father Pesci said one way to that distinction is to “hire people who have a great vision for the school.”

Loyola is a member of the Association of Independent Maryland and D.C. Schools (AIMS), a nonprofit that serves independent schools through tools such as professional development and accreditation services.

“We’ve sort of become a pacesetter in the way in which we strive for excellence,” said Father Pesci, who noted “the diversity has increased dramatically during my tenure here.”

The institution doesn’t always “jump at the latest and the greatest” technology, Father Pesci said, who stressed the importance of teaching students to “find the truth. We have to teach them, how do we evaluate information, how to get all the information and make ethical judgments and decisions.”

Loyola Blakefield is the most expensive secondary institution in the Archdiocese of Baltimore – tuition for the 2012-2013 school year is $17,660, including fees – but Father Pesci called it the best value among our best (Baltimore) schools.”

The school’s academic programs are as strong as any other private – Catholic or non-Catholic – school in Baltimore, Father Pesci said.

“We’re always going to be gearing up,” he said, “for the next piece.”