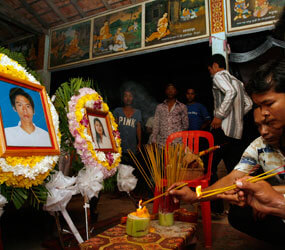 PHNOM PENH, Cambodia – The Catholic Church in Cambodia planned a special Mass for victims of a bridge stampede during the Water Festival on Diamond Island in Phnom Penh, reported the Asian church news agency UCA News.

The chaos Nov. 22 that killed more than 375 people and injured at least 755 was seen as the biggest tragedy for Cambodians since the Pol Pot regime, said Prime Minister Hun Sen. The government announced it will give 5 million riel ($1,230) to each family of the dead for transporting the bodies. It also scheduled Nov. 25 as a national day of mourning.

Catholic Church officials said they would offer a special Mass for the dead Nov. 25 at Psataught Church in the capital.

Caritas Cambodia is on standby if further help is needed, said Sok Sakhan, disaster management officer, noting the injured were being treated by the government and at various hospitals.

Chhem Chhean, a 25-year-old victim, said all she remembered amid the concerts, boat races and fireworks was that people started pushing each other to get away from the bridge.

The cause of the tragedy is unclear.

The Associated Press reported that most of the dead had suffocated or been trampled or crushed to death on the bridge, which became so tightly packed that survivors later said they had been unable to move or even to breathe. AP reported that some of the dead had drowned or were killed when they leaped from the bridge into the water of the Bassac River or onto nearby concrete pilings.

The Water Festival on Diamond Island, located in the confluence of Cambodia’s four main rivers in Phnom Penh, is an annual event for Cambodians.