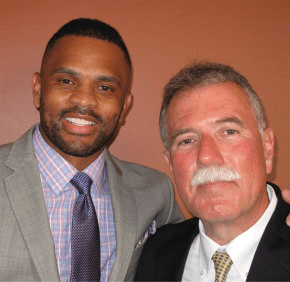 By Paul McMullen
pmcmullen@CatholicReview.org
Twitter@ReviewMcMullen
CATONSVILLE – Calvert Hall product Juan Dixon, who led the University of Maryland to its only national championship in men’s basketball in 2002 and is now an assistant coach for the Terps, headlined the 2014 inductees into the Baltimore Catholic League Hall of Fame May 1.
A sold-out banquet at Rolling Road Country Club included Gary Williams, Dixon’s coach at Maryland, who himself will be inducted into the Naismith Hall of Fame later this year.
Dixon’s success story has been well-documented. Transferring into Calvert Hall as a sophomore in 1994, he arrived with considerable personal challenges, as both of his biological parents had been addicted to heroin and died of AIDS-related illnesses.
Through his own tenacity and the support of his extended family and then-Calvert Hall coach Mark Amatucci, Dixon led the Cardinals to the BCL title in 1997, but many Maryland fans were skeptical about a seemingly frail shooting guard who weighed all of 150 pounds when he arrived in College Park.

Former Loyola Blakefield coach Jerry Savage welcomes Morris Cannon, left, and Mark Rohde, the two newest Dons in the Baltimore Catholic League Hall of Fame May 1 at the Rolling Road Country Club. (Paul McMullen / CR Staff)
Dixon continued to apply himself, was an all-Atlantic Coast Conference selection as a sophomore and junior and the Most Outstanding Player in the NCAA tournament in 2002, when he was also the ACC Athlete of the Year.
Dixon credited his time at Calvert Hall as a springboard.
“It helped me prepare for life and, most importantly, it gave me an opportunity to play basketball, which is something I loved,” he said. “I played in a prestigious basketball league and I’m very humble and grateful for the opportunity.”
The other inductees included:
·        Morris Cannon and Mark Rohde, who graduated from Loyola Blakefield in 1972 and remained as teammates at what is now Loyola University Maryland;
·        Adrian Hubbard and Rob Valderas, 1975 graduates Towson Catholic and Cardinal Gibbons, respectively, who became teammates at St. Joseph’s University in Philadelphia;
·        Gene Nieberlein Jr., Class of 1976 at Mount St. Joseph, who went on to play at Indiana University and Rutgers;
·        Carl Fornoff, a 1979 graduate of Archbishop Curley who helped Washington College to national prominence at the Division III level and has spent the last two decades working with disadvantaged youths at Villa Maria, a Catholic Charities of Baltimore program;
·        Sam McGee, Class of 1990 at St. Frances Academy, who starred at Bloomfield (N.J.) College;
·        Cokey Robertson, who coached St. Maria Goretti from 1974 to 2008, and directed the Gaels to four BCL titles.
Robertson’s fans in attendance ranged from a former player who came in from Hawaii to Father Collin J. Poston, the pastor of St. Mary, Hagerstown, who provided the invocation.
Danny Witt, who graduated from Mount St. Joseph in 1966, prior to the formation of the BCL in 1971, was honored as a contributor. Like many at the dinner, he got his start playing in the Gaels’ “Sweet Sixteen” tournament for CYO 8th-graders.
Villanova coach Jay Wright, whose incoming recruiting class includes Phil Booth Jr., the reigning BCL Player of the Year, was the guest speaker. Wright first became familiar with the BCL when he was a freshman at Bucknell in 1979-80 and the top Bison player was Bob Barry, who had played at Loyola Blakefield.
“Not many cities in America can do this,” Wright said. “Talk to coaches; nowhere in the country do you find a more perfect combination of toughness and basketball IQ than in the Baltimore Catholic League.”
See more sports stories and videos here.
PrevNext