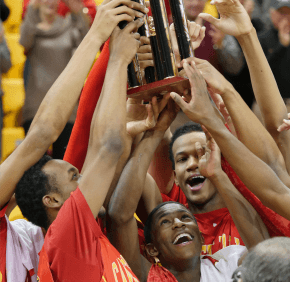 By Paul McMullen
pmcmullen@CatholicReview.org
Twitter: @ReviewMcMullen
TOWSON – Justin Gorham went through an identity crisis at the Baltimore Catholic League’s annual awards banquet.
Yes, he was acknowledged as the Most Improved Player in one of the nation’s premier prep boys’ basketball leagues, but that Feb. 16 ceremony included his name being mispronounced – and then misspelled “Graham” on his trophy.
Everyone at SECU Arena knew about Gorham Feb. 23, however, when his tap-in at the buzzer lifted top-ranked Calvert Hall College High School to a 53-52 victory over The John Carroll School in the championship game of the 44th annual BCL tournament.
The outcome gave the Cardinals their record-tying seventh BCL championship, but the first with this group of players, a senior-dominated bunch for coach John Bauersfeld.
To view a slideshow, navigate the arrows below. Tournament MVP Nico Clareth will move on to Siena College, and play for Jimmy Patsos, the former coach of Loyola University Maryland. Drew Edwards, another first-team BCL all-star, is headed to Providence College in the Big East Conference. Evan Phoenix will go to Central Connecticut, where the Northeast Conference includes Mount St. Mary’s.
As juniors, they lost to Mount St. Joseph in an overtime BCL final, and all would have left Calvert Hall unfulfilled if not for Gorham, a junior whose put-back of a Clareth miss set off a wild celebration and underlined just how far he has come since last season.
Gorham initially followed his big brother, Jerry, to Mount St. Joseph, where he played junior varsity as a freshman. He then joined some AAU teammates at Calvert Hall, where he averaged just seven minutes of playing time as a 6-foot-5-inch, 195-pound sophomore.
After putting in what he said was “a lot of time and effort,” Gorham grew into a key contributor who is averaging 12 points and 8.5 rebounds this season as a 6-7, 215-pound junior.
While his continuing development is one of the reasons the Cardinals have won 13 straight, was there ever any thought to keeping Gorham on the Cardinal J.V. last season, when he was just 15 years old?
“That was not an option,” Bauersfeld said. “With talented players, you always want to push them. He responded.”
Gorham lives in Columbia and commutes to Calvert Hall with senior guard TJ Duckett, who lives in Severna Park. The Cardinals have a considerable south-side influence, as Phoenix commutes from Kent Island.
“You can see Justin’s work ethic every day in the gym, he never lets up defensively,” the 6-foot-8-inch Phoenix said of Gorham. “We guard each other in practice, and he makes me better every day.”
The game, on the campus of Towson University, began on a somber note, as BCL commissioner Jack Degele took to the public address system to inform the crowd that former Loyola Blakefield coach Jerry Savage, one of the league’s founders, was recovering from a stroke he had suffered earlier in the day.
John Carroll, which shared the regular-season crown with Calvert Hall, used its international lineup to lead by as many seven points as late as the fourth quarter. It had a 52-47 cushion with 1:57 left, but didn’t score again.
Clareth had a game-high 18 points, and Gorham and Edwards combined for 23. BCL Player of the Year Kimbal Mackenzie, one of six John Carroll players from Canada, led coach Tony Martin’s Patriots with 12 points.
Calvert Hall, John Carroll and Mount Carmel, which finished third in the BCL regular season, will all play in the Alhambra Catholic Invitational Tournament March 12-14 at Frostburg State University. Bishop Walsh of Cumberland is the host institution.
Also see:
Climbing for a cause: Mountaineer set to climb six of the world’s tallest mountains
Caringi traces soccer success to Highlandtown CYO rivalries
PrevNext