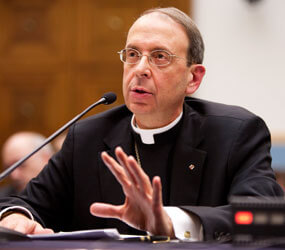 WASHINGTON – Concerns that religious liberty is being eroded by government action and policymaking prompted the U.S. Conference of Catholic Bishops to open a campaign in 2011 to head off what they consider dangers to the rights of people of faith and conscience.

The bishops’ concerns deepened as the year progressed, leading to the formation of an Ad Hoc Committee for Religious Liberty in September.

The 10 bishops on the committee are working to shape public policy and coordinate the church’s response on the issue.

Bishop William E. Lori of Bridgeport, Conn., was named to chair the committee and he wasted no time in taking the bishops’ concerns to various public forums.

Addressing the bishops Nov. 14 at their fall general meeting in Baltimore, Bishop Lori said there seems to be a pattern in culture and law to treat religion “as merely a private matter between an individual and one’s own God.”

“Instead of promoting toleration of differing religious views, some laws, some decisions and some administrative regulations treat religion not as a contributor to our nation’s common morality but as a divisive and disruptive force better kept out of public life,” he said.

The issue posed such deep concerns that Archbishop Timothy M. Dolan of New York, president of the bishops’ conference, pursued a private meeting with President Barack Obama at the White House.

Archbishop Dolan said he came away from the Nov. 8 meeting “a bit more at peace than when I entered” the Oval Office.

Speaking at a news conference after Bishop Lori’s address, Archbishop Dolan said the president was “very open to the sensitivities” of the U.S. Catholic Church on issues related to religious freedom. He said the meeting touched on a wide range of topics and that by mutual agreement with the White House, additional details would not be made public.

The issue also gained the attention of Vatican officials. Eighteen bishops from New England states discussed the church’s response to government infringements on religious liberty during the first round of “ad limina” visits in early November in visits with several Vatican agencies.

Bishop Lori took the church’s concerns to Capitol Hill in October, testifying during a hearing by the House Judiciary Committee’s Subcommittee on the Constitution. He explained that the Bill of Rights and the Declaration of Independence require government “to acknowledge and protect religious liberty as fundamental, no matter the moral and political trends of the moment.”

During 2011, he said, “the bishops of the United States have watched with increasing alarm as this great national legacy of religious liberty, so profoundly in harmony with our own teachings, has been subject to ever more frequent assault and ever more rapid erosion.”

Underlying the bishops’ concerns was a series of government actions:

– Interim rules issued by the Department of Health and Human Services in August that would mandate no-cost coverage of contraception and sterilization in most private health insurance plans, accompanied by a proposed religious exemption that Catholic and other religious leaders considered too narrowly drawn.

– The denial of grant funding by the Department of Health and Human Services to the bishops’ Migration and Refugee Services to continue providing case management services to foreign-born human trafficking victims because the agency declined to refer for or provide contraceptive service, abortion and sterilization if a client request such services.

– The U.S. Agency for International Development’s requirement that Catholic Relief Services and other contractors include condom distribution in their HIV prevention activities and provide contraception in a range of international relief and development programs.

– The Department of Justice’s actions to mischaracterize the federal Defense of Marriage Act, which states that marriage is the union of a man and a woman, as an act of bigotry and to actively attack its constitutionality.

– The Justice Department’s efforts to undermine the “ministerial exception” that exempts religious institutions from some civil laws when it comes to hiring and firing.

– State actions on same-sex marriage that have resulted in Catholic Charities agencies in Illinois being “driven out of the adoption and foster care business” and some county clerks in New York state facing legal action for refusing to participate in same-sex unions.

A White House spokesman said Nov. 29 the Obama administration was working to “strike the right balance between expanding coverage of preventive services and respecting religious beliefs” as it decides on a religious exemption in health plans beginning Jan. 1, 2013.

At least one bishop has said he would be forced to stop offering health insurance to his employees if the HHS mandate remains unchanged. Bishop Robert N. Lynch of St. Petersburg, Fla., said Nov. 30 during the diocesan Red Mass, “If (government officials) fail to shift in their present positions, then 2,300 employees of the Diocese of St. Petersburg will lose their health care coverage which they have come to treasure and rely upon.”

Bishop Lynch, whose diocese is self-insured, said he “would simply give them what we would have paid for their health care and tell them they have to look for coverage elsewhere.”

It was not just the bishops who voiced concern about threats to religious liberty.

An unusual coalition of national Catholic organizations and universities placed full page ads in two Capitol Hill publications in October to protest the Obama administration’s plan to include contraceptives and sterilization among the mandated “preventive services” for women under the new health reform law.