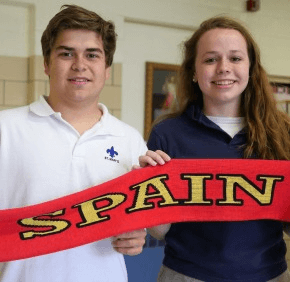 ANNAPOLIS – About 20 minutes into a conversation about their upcoming trip to Spain, students at St. Mary’s High School disclosed a major motivator behind the journey.

“Chupa Chups!” exclaimed Sophia Caltabiano, a senior, referencing the Spanish brand of lollipops that are the rage of the moment at the Annapolis school.

Spanish teacher Ellen Smith, who is leading the trip, had been waxing on language immersion and cultural enrichment. She smiled wryly.

“They’ve already planned out how to make space in their suitcases for Chupa Chups,” she sighed.

Candy aside, the students had their own reasons for traveling to Spain.

Lindsay Keough, a senior, is looking forward to a first-hand view of the architecture of Servant of God Antoni Gaudí, including Barcelona’s incomplete Sagrada Família cathedral, on which construction began in 1882.

Anna Petrides, a junior, declared that she was “most looking forward to seeing how urbanization has affected the country, especially with regard to how it maintains sustainability.”

Her classmates immediately burst out laughing at her tongue-in-cheek dig at academia.

Most of the three boys and nine girls going on the trip are Smith’s Advanced Placement Spanish students, though some are in mid-level Spanish classes and there’s a French student or two simply interested in the overseas experience – or plentitude of Chupa Chups.

Smith studied in Spain in the early 1990s and has wanted to return ever since.

“They’ve all heard me talk about it so much; it’s time we see it,” she said.

Communication probably won’t be a problem. By the time they complete their Advanced Placement courses, Smith said, “my students are proficient and close to fluent.”

They get plenty of practice outside the classroom, too, babysitting Spanish-speaking children during Hispanic ministry events at St. John Neumann, a mission of St. Mary Parish in Annapolis.

“It’s been nice because it has been a way for our students to be involved in the community,” Smith said. “They love interacting with the children.”

Many of the students plan to use Spanish through college and into their careers.

Keough said that she will minor in Spanish while studying to enter medical school.

“I’m going to try to do a Doctors Without Borders type of thing,” she said, adding that her inspiration came from a previous class trip to Costa Rica, where she and other students volunteered with Asociación Obras del Espíritu Sancto, a Catholic-inspired social welfare organization.

Caltabiano said that she hopes to one day become an attorney who provides services in Spanish.

Cassie Mann, a senior, said she will pursue a career as a high school Spanish teacher.

Smith has been teaching Spanish for 20 years; six at St. Mary’s.

She lauded the support the school affords the Spanish program and noted that St. Mary’s 85-minute periods allow for classes that “get about as close to immersion as you possibly can.”

Editor’s note
This is the final installment of Beyond the Bell for the 2014-15 school year. See all installments of the column below.

Beyond the Bell: Cristo Rey performers step out of comfort zones

Beyond the Bell: Hagerstown students go far beyond the boundaries